Part of Shamwari Group, Shamwari Game Reserve situated in the Eastern Cape, recently helped to clean up the local Blue Water Bay Beach in Port Elizabeth as part of its ongoing support for the local community. 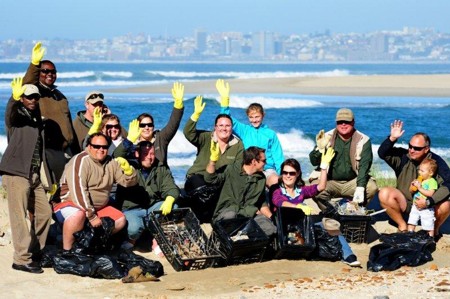 Shamwari Game Reserve’s game rangers joined forces to get involved in a different side of conservation and contributed to the preservation of the local marine environment. The rangers chose the Blue Water Bay Beach due to its condition and the fact that it’s a popular fishing spot and there was an enormous amount of fishing line found discarded, which is potentially harmful to the bird and marine life.

The Blue Water Baycommunity also got involved and helped the Shamwari rangers with the beach clean up including a father and his two young kids who helped to pick up rubbish. All refuse like plastic, broken glass and metal that was collected was sorted and recycled at the nearest recycling centre.

Not only did the Shamwari team rid the beach of rubbish but they also painted the concrete picnic tables and chairs in the parking lot to make the area look more inviting for everyone to enjoy. The paint was kindly sponsored by Neutron Paints in Port Elizabeth.

Comments Group General Manager, Joe Cloete: “By all working together we not only help the environment but ourselves. In this instance, with families getting involved, it helps to set an example for the younger generation and also puts pride back into the community whilst help saving our marine life.”