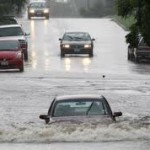 In a blog post SAWS says these extreme weather conditions will be caused by a cut-off low pressure system and cold front moving across the country.

It says, ‘the public is warned about the very cold conditions, heavy rainfall, snow (heavy in places) and strong winds which are expected to set in over parts of the Western and Northern Cape provinces on Friday.’

‘Snowfall is expected to start over the mountains in the south-western parts of the Western Cape during Thursday night, spreading rapidly east to reach the eastern half of the Eastern Cape by the following evening.’