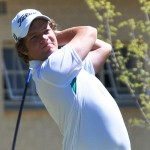 Rookie Jared Harvey shot an unmatched 69 at Royal Johannesburg and Kensington Golf Club on Wednesday, claiming a two-stroke victory at the seventh installment of the Sunshine Big Easy Tour presented by Stonehage.

“I’m feeling very good. I’ve let it all go and it’s finally hit me now that I’ve won the tournament. All of that hard work and preparation – it’s nice to get some reward for the effort you put in – long hours tinkering with the swing. I’m very happy that I got the job done,” he said.

The 23-year-old began the day as one of five leaders, cruised into the sole lead with an eagle at the first and never looked back, finishing at six-under-par and claiming a two-stroke victory over Riekus Nortje.

“That eagle at the first was key to the outcome of my round,” saidHarvey. “There aren’t many gifts out there, and you want to get off to that good start, because there are some tricky holes. It takes that pressure off and settles you straight away, and I always feel comfortable being under the card early.”

And this course, which is home to the Joburg Open, punishes any mistakes. In fact, 175 double bogeys or worse were carded over the two tournament rounds this week. Harvey knew the challenge he faced, yet reached the clubhouse in 69 during both rounds.

“Two 69s at any course you would take, but more so here. It’s such a good test, because there are long holes out there and you have to hit very good shots to be rewarded. I’m very happy with that score because it shows that there was some good golf played,” he said.

It’s tough for the rookies on the Sunshine Tour – they have to qualify for nearly every tournament and must then face the immediate pressure of contending with veterans. Harvey mentioned the benefit of the extra events that the Big Easy Tour offers, and added: “I’m starting to feel a bit more settled on Tour life. I think that’s a very big thing for the rookies – you want that sense of belonging – and that comes with good results. It’s been a slow process up, and now I feel like I belong and I can play and stay, so I’m ecstatic.

“It’s great that they give us this opportunity to keep your game sharp. Social golf is just not the same as that tournament feel and pressure, so these Big Easy events are a nice way to keep the golf going and keep tournament fit.”