Shamwari Game Reserve, part of Shamwari Group, situated in the Eastern Cape near Port Elizabeth, recently had the privilege of hosting Kineton High School, a specialist sports college from the UK who took part in the Shamwari Conservation Experience program. 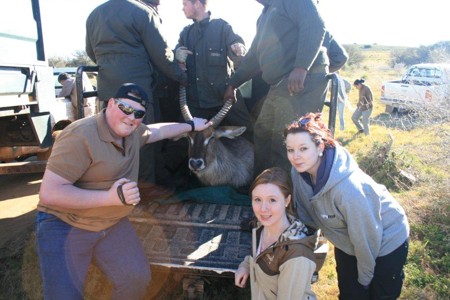 Students aged between 15 and 16 spent two weeks at Shamwari Game Reserve to take part in the unique Shamwari Conservation Experience program. The teens were spilt up into three groups and took turns each day to get involved in various conservation and community projects and as a whole group they took part in conservation work in the morning and community work in the afternoon. Due to the nature of the college the group also spent a great deal of time with the local community doing sports coaching and teaching the local kids the tactics of soccer and different sports.

The group also had the opportunity to build and plant a herb and vegetable garden and built a garden fence as part of their community projects. They took part in buffalo and zebra darting and conservation challenges such as survival techniques, track and sign identification and traditional rifle shooting as part of the conservation part of their trip. Not only was the visit hands on and practical but they also studied hard for the FGASA Wild Dog test.

During their stay they experienced the wildlife side to Shamwari whilst on game drives, as they had close encounters with elephants and rhinos and they were lucky enough to see a lioness with her 6 new cubs by a warthog they had just hunted moments ago.

Towards the end of the two weeks the Shamwari rangers organised a team building day with the group and the local kids, which they called Boeresport, and they played games like rope pulling, three-legged race, potato-spoon run, smartie-flour challenge, spear throwing, apple bobbing, drolspoeg (kudu dung spitting) and a potjie making challenge.