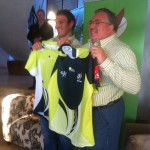 The SWD Eagles spent Monday dissecting their away loss to the Platinum Leopards at Profert Olen Park in Potchefstroom on Saturday.

“It was nothing less than disappointing, and the players have been the first to acknowledge this,” said the Eagles’ manager, Martin de Vos. “But we began working on the problem first thing on Monday morning, and we’re hoping for a turn-around against Boland.”

The Eagles will entertain the Boland Cavaliers at their home ground, Outeniqua Park, in George, on Friday the 27th at 7:00 p.m.

Mr. de Vos said that the team had the hunger to be great, “But we’re not there yet.

“We spent Monday going through the videos, and we’ve identified our mistakes. Now we’ll spend the rest of the week concentrating on fixing them, and on planning a way forward.”

Coach Johan Lerm conceded that the team had had a bad game, particularly in the first half. The Eagles trailed 44-7 at half time.

“We didn’t follow our game plan, and we made too many mistakes on defence,” he said.

“But if you look at the score board, you’ll see that we ran in four tries in the second half, which means that the second half score was actually 28-27.

“So this shows that we do have the strength and the mental ability to fight back, and that it’s not a problem of fitness, but rather of focus.”

Mr. Lerm said that the Leopards outplayed the Eagles on the day. “And we didn’t play according to our structures,” he said.

“But now that we’ve analysed the results, we’ll spend the rest of the week preparing for Boland, and for us that means going back to basics, and concentrating on getting good first phase ball and creating space for ourselves to work in.”

Mr. de Vos said that the team will be aiming for consistency in the future.

“We want to win the away games as much as the home games – and once we start doing that, we’ll be able to move forward the way we should,” he said.

Wing Clinton Wagman, who was taken off the field with an ankle injury, has been declared unfit to play this week. Mr. de Vos said that he is being monitored by the medical team.