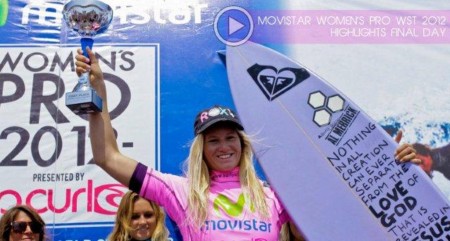 Competing in excellent one metre waves at the lefthand pointbreak of Lobitos, Buitendag used her powerful forehand attack to post a heat total of 15.00 points (out of a possible 20), earning scores of 7.0 and an 8.0 on her two best rides, to Blanchard’s 12.90 (7.9 and 5.0).

“I feel really emotional and very happy with my victory,” said Buitendag on the podium. “I never thought that I would make it past the Quarter-Finals, let alone past Sofia (Mulanovich) in the Semi-Finals. So to make it to the Finals and win the contest is such an incredible feeling. Alana (Blanchard) surfed really well, the waves were excellent throughout the whole week and this is the most important moment for me in my early career.”

“This was such a fun contest and I’m thankful for making it to the Finals,” said Blanchard. “It’s a shame I never got a good second wave to backup my score, but Bianca (Buitendag) was unstoppable throughout the entire event and she deserved the victory.”

Buitendag, who has based herself in France where she has already won three consecutive ASP Women’s Pro Junior (U20) events since matriculating last year, was dominant throughout the event in Peru.

She won her opening encounter and then placed second behind local heroine and 2004 ASP Women’s World Champion, Sofia Mulanovich (PER) to move into the Round of 24, where she again won to reach the quarter-finals. In the final day one-on-one heats Buitendag defeated Port Elizabeth born Australian Philippa Anderson before getting revenge over Mulanovich in their semi-final match-up.

Compatriot Sarah Baum, the only other South African in Peru, placed third to record her best result in an ASP 6-Star event. Baum, 18, from Athlone Park, Durban overcame ASP No. 8 Paige Hareb (NZL) and ASP No. 10 Rebecca Woods twice on her way to the semis where she was narrowly beaten by Blanchard.

Baum pocketed US $1 900 and 2080 points which moved her up to No. 12 in the ASP World Star women’s rankings. With eight of women ahead of her on the rankings currently competing on the ASP Women’s WCT, five of whom will probably re-qualify, Baum is now firmly in contention for a spot on the 2013 ASP Women’s WCT with five ASP Star Series events still to be run this year

The remaining ASP 6-Star events will be held in Europe on consecutive weeks. The first will be held in Spain from September 12-16 and the following two will be in Portugal, with the final event on the Azores Islands from September 27-30, where the top six athletes on the ASP World Star Series will qualify for the 2013 ASP WCT.