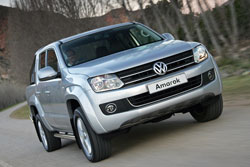 It usually takes ages (and some times it never happens) for car manufacturers to actually listen to grumbles from the public and attach enough weight to criticism by motoring journalists to actually do something about it – but not so Volkswagen South Africa who have made a few important improvements to their popular Amarok double-cab bakkies to eliminate the flak.

VW has tweaked the engine mapping and stepped up the turbos’ boost pressures to raise the output from 120kW to 132kW.

The main mutters were about the Amarok’s 120kW engine, which felt a tad sleepy and its sensitive clutch, both of which led to some embarrassment when the going became a bit rough. Bearing in mind that much was made of the carrying capabilities of the Amarok when it was introduced to the local market, public expectations might also have been a bit too high.

Not that the complaints were without substance because the 120kW engine did feel a bit underpowered when taking strain and the clutch, certainly, was more than just an irritation. And of course negative urban rumours also did the rounds, fuelled mainly by the owners of breker-bakkies who from the start voiced their doubts about the combination of a small turbo-charged engine and a class-leading load capacity.

Up there with the competition

To overcome the problem VW tweaked the engine mapping and stepped up the turbos’ boost pressures to raise the output from 120kW to 132kW. The white coats also made some key adjustments to the clutch travel and set-up to eliminate the Amarok’s tendency to stall.

Quite stylish, don’t you think?

OK, you might justifiably argue that 12kW extra doesn’t make a huge difference and you are right– and wrong. At a recent introduction of the more powerful engine, I drove the 2.0-litre BiTDI 4×2 Highline model and though the hike in output hardly pins you back in your seat, it makes enough difference to count. The clutch, too, feels miles better.

Regrettably, we were not afforded the opportunity to put the new clutch-power set-up to any serious testing in rough conditions as we travelled mainly on 300 kilometres of tar. However, the Amarok felt sprightly enough and would probably be even a little more enthusiastic down at the coast.

Since the Amarok was introduced locally two years ago more than 7200 of its double cab models have left dealer showrooms with their new owners and there are no noticeable signs of its popularity waning.

Yes, the Amarok is not cheap, with the two 132kW models, the 4×2 Highline priced at R375 100 and the flagship Highline 4Motion version costing R425 300, but for these price tags you are getting one helluva nice bakkie that oozes quality and class in a cabin that is as spacious and as comfortable as that of a smart sedan.

Wisely, VW SA has not tinkered with the original launch set-up of a smooth six-speed manual transmission, linked to either a 4Motion four-wheel drive or a 4×2 rear-wheel drive. With its extra power, VW reckons it will do the 0-100km/h dash in 10.3 seconds and gallop on to a top speed of 184km/h. They claim a combined fuel consumption of 7.9 lites/100km and emissions of 208g/km. Fuel tank capacity is 80 litres.

The Amarok wins brownie points for its load-carrying ability.

No other cosmetic or mechanical upgrades have been carried out and the two other power options in the double cab range, the 90kW turbo diesel and the 118kW TSI, remain unchanged.

The Amarok is as attractive as any bakkie can be in an easy-on-the-eye, more rounded way, which is a pleasant contrast to the sharp lines and boxy shapes of most other vehicles in this category. Not only does it offer a car-like ride but also it is also well decked out with active and passive safety systems. In addition to airbags (including head/thorax airbags) these include an Electronic Stabilisation Program that includes a trailer stabilisation system.

Keeping it constant on the descent

Another safety feature is “Off-Road Mode” (activated by the press of a button) which is enabled up to a vehicle speed of 100km/h. In this mode, the ESP system, Electronic Differential Lock (EDL), Anti-Slip Regulation (ASR) and Anti-Lock Braking system (ABS) are all tuned for challenging off-road conditions.

The ABS system can reduce braking distance both off-road and on gravel road surfaces, often significantly depending on the road composition. When “Off-Road Mode” is activated while the bakkie is driven at less than 30km/h, Hill Descent Assist is also activated. This holds driving speed constant on steep descents. For the first time in this class, when Hill Descent Assist is activated, the driver can individually adapt the vehicle’s speed to a particular driving situation by accelerating or braking.

Wisely, VW SA has not tinkered with the original launch set-up of a smooth six-speed manual transmission, linked to either a 4Motion four-wheel drive or a 4×2 rear-wheel drive.

There five double cab models to choose from and my choice would be the switchable four-wheel drive (4MOTION) which is designed to cope with all terrains and is easily identified by a red “4” in the badging. It utilises a typical ‘rigid’ system for its four-wheel drive, a system that is practice-proven in the bakkie segment. When engaged at the press of a button it transfers power equally to both axles. For terrain that is more difficult a low ratio transfer case adds enough extra traction to make seriously rough-and-tough off-road expeditions possible.

The 4Motion has a slope angle of 45° and an optional heavy-duty spring package ensures a high overload safety factor. Like all double cab derivatives, the 4Motion is fitted with an electronic differential lock that has automatic braking intervention, which further improves traction on all types of road surfaces.

The living quarters are big enough for all the boeties

The living quarters are comfortable and spacious.

The flagship Highline has all of this plus part-chrome side mirror housings, various chrome accents outside and inside the vehicle, flared fenders, 17-inch alloys, a colour contrasting instrument panel, an automatic climate control system (Climatronic), a six-speaker sounds system and elegant fabric seat covers.

The living quarters are generous enough to accommodate five biggies in comfort. With only two aboard the rear seat can also be folded to increase interior cargo space.

Get a load of this!

The Amarok makes it is easy to transport sports equipment like quad bikes or bulky items such as machinery, thanks to its load sill height of 780mm and payload capacity of up to 1.15 metric tons. Four tie-down eyes at the corners of the load-bed secure cargo while on the move. When pulling a trailer the bakkie can handle up to 2.8 metric tons of suitably braked trailer load.

Overall, the Amarok offers a good choice of double cabs, designed for specific applications, whether for work or recreation. As bakkies go, it is difficult to find something not to like about these versatile, attractive, safe and comfortable five-seaters.

The Amarok double cab models and prices (which include a three-year/100 000km warranty and a five-year/90 000 km service plan) are: