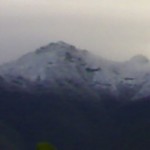 The Western and Southern Cape can brace themselves for the next winter onslaught, after mild weather for the past two weeks.

The SA Weather office predicts very cold, wet and windy conditions that will continue into Wednesday.

Heavy rainfall and gale force winds are also expected along the south coast and adjacent interior, from Cape Agulhas to St Francis Bay.

Sutherland in the Karoo will be the coldest place in the country, with a minimum of minus eight degrees.