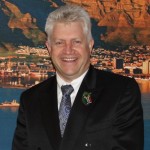 Last week, Western Cape Minister of Finance, Economic Development and Tourism, Alan Winde met with a high level trade delegation from the United States of America (USA). This meeting, which followed two months after Minister Winde led an introductory trade and investment mission to the USA, was utilised to assure potential investors that the Western Cape is open for business.

Following Minister Winde’s meeting with the delegation, the Western Cape’s trade and investment promotion agency, Wesgro, hosted the Under Secretary for Economic Growth, Energy, and the Environment at the State Department, Robert Hormats, for a business dinner attended by Western Cape based companies.

Minister Winde said: “The United States is an active partner in investment into the Western Cape. Between 2009 and June 2012, the United States invested in 13 projects representing a total capital investment of R1.75 billion. From that investment a total of 1,895 jobs were created in the Western Cape. By actively engaging with the key decision-makers in United States business and government we want to firstly, encourage more investment in our Province and secondly, dispel the negativity that may have been created by the ruling party’s lack of singularity on South Africa’s economic policy. We want to assure international investors that in the Western Cape, we are clear that our first priority is growth and job creation. We are therefore striving to create a Western Cape that is a better place to invest, to do business, get a job and earn a living, for everyone.”

Nils Flaatten, CEO of Wesgro said: “Under Secretary Hormats spoke very positively about extending the African Growth and Opportunity Act (AGOA) beyond 2013. He touched on the textile provision, which Wesgro supports. Together with the Western Cape-based business present at the dinner, we expressed our sincere gratitude for the current Administration’s support for retaining South Africa as a beneficiary in the Act. We put forward the argument that should South Africa be removed from AGOA, there would be significant damage to the African and regional system of trade. However, it is very clear that South African business must take ownership of this message and deliver it in a clear campaign to lawmakers on Capital Hill. In this regard we need strong collaboration between the South African Government, business and labour. The United States remains one of the Western Cape’s top 5 sources of foreign direct investment.”