13 August 2012 – Golf ball technology is renowned for its ability to allow players to hit the ball further or with greater control. Millions are spent on marketing the latest golf ball technology, and equipment companies will invest up to $200-million in the research and development of a new ball. But in South Africa, a revolutionary little ball is quite literally saving lives – off the fairways.

As the annual Sanlam Cancer Challenge wrapped up its nationwide club competitions in July, the most talked about balls involved brands such as Titleist, Srixon, Callaway, Nike and so on.

But when it comes to making the greatest impact in South Africa’s largest charity golf initiative, the P-Ball has been the clear winner.
Every year, the Sanlam Cancer Challenge raises millions of rands for the Cancer Association of South Africa (CANSA) through its club competitions from March to July, then the Regional Finals from August to September, and culminating in the National Finals at Sun City in October.

But even more important is the cancer awareness the competition generates.

For the likes of 67-year-old Johannesburg golfer Hennie Pretorius, this awareness saved his life. And his lifesaver was the revolutionary yet simple little device known as the P-Ball.

The P-Ball is a ball made of biodegradable powder that dissolves in liquid. It is used to detect the early signs of prostrate cancer.  Basically, if a person is unable to completely dissolve the ball when urinating, they may have prostrate cancer.

“I just decided to try it myself and I was shocked when I couldn’t dissolve the P-Ball. That made me go for a check-up,” said Pretorius.
He was diagnosed with prostrate cancer, which had developed into a tumour the size of a tennis ball.

“I had this nagging back-ache that wouldn’t go away. I remember a friend who had the same, and he later passed away from cancer. So that was in the back of my mind when I tried the P-Ball test. That was in 2009, and I’m happy to say I’m still clear to this day.

“But I tell all the guys I meet playing golf that they’ve got to get tested because prostrate cancer is a silent killer of men. Purely because of the awareness around cancer through my playing in the Sanlam Cancer Challenge golf days, I was able to avoid becoming another cancer statistic.”

With the first stage of this year’s Sanlam Cancer Challenge now complete, the Regional Finals will be played to determine who qualifies for the National Finals to be played on both the Gary Player Country Club and Lost City Golf Club courses in October.

For more information go to www.sanlamcancerchallenge.co.za 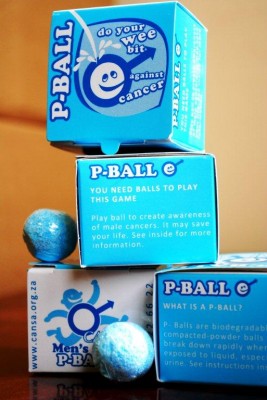 About the Sanlam Cancer Challenge and CANSA

Sanlam and CANSA have partnered the Sanlam Cancer Challenge since 1993. CANSA’s purpose is to lead the fight against cancer in South Africa by offering a unique and integrated service to the public and all people affected by cancer. As a leading roleplayer in cancer research (more than R4.5 million spent annually), the scientific findings and knowledge gained from research are used to realign the health programmes as well as strengthen the watchdog role to the greater benefit of the public.

The purpose of the Sanlam Cancer Challenge is to raise funds and awareness annually for the fight against cancer. Close to 40 000 golfers play in more than 800 club competitions held around the country in support of CANSA’s prevention programmes and patient care services throughout the year. Visit www.sanlamcancerchallenge.co.za