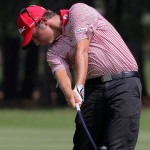 Rookie Riekus Nortje looked every inch the calm professional on Wednesday as he won the Irene Country Club leg of the Sunshine Big Easy Tour presented by Stonehage by five strokes.

He carded his second successive six-under-par 66 to romp away with the title, with Andre van Zyl and Jeff Inglis his nearest challengers, and, in the process, won his third Big Easy Tour title – the first man to pull off three since its inception last year.

“My confidence is definitely at a high at the moment,” he said. “Mentally I feel a lot stronger and it feels like I can handle any situation so I’m very pleased.”

He started very confidently, making five birdies in his opening nine to romp to 11-under for the tournament and a healthy cushion between himself and his pursuers.

He bogeyed the 10th, but pulled that shot back with a birdie on 12, after which he cruised home. There was one more chance to make the lead even bigger, when his eagle putt on 17 slid just past the hole on the left, but the birdie was enough as he cruised home.

“I actually thought it was a better round today,” he said of his six-under tour of the course. “I didn’t make as many birdies and I didn’t make an eagle but it was a lot more solid. I holed a couple of good putts. All round I was never in trouble.”

Van Zyl put himself in contention with the best round of the day, his seven-under-par 65 containing no fewer than 11 birdies, with four bogeys seeing him fall short of the lead.

Inglis also had a bit of a battle, with nothing much going his way on his way to a two-under-par 70 – never good enough to catch a flying Nortje.

Nortje’s third win gives him a big leg up on the Sunshine Tour exemption list: “My third win pushes me up into a higher category which gets me into tournaments easier and it actually takes off a lot of pressure. It makes the main tour a little bit better because I don’t have to pre-qualify as much,” he said.