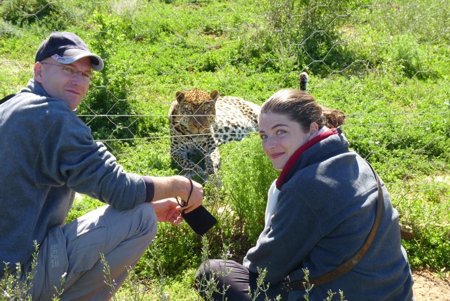 Kuma remembered and recognised Alberto straight away and immediately came to the fence to see him. Alberto was greeted with a soft meow by Kuma as they instantly shared memories of their past.

Alberto rescued two leopard male cubs, Kuma and Tango in 1996 in Ivory Coast from an illegal trader when they were just a few days old. He nursed them, at his own expense until they grew too big and he was then forced to hand them over to the local zoo, even though it was incredibly run down and in need of funds itself.

The female, Tango escaped from the zoo and was shot leaving Kuma alone, but Alberto committed himself to taking care of and feeding him, again at his own expense, and visited the zoo every single day. After a tedious and long process Alberto arranged for Kuma to be transferred from the Ivory Coast zoo to the Born Free Animal Rescue Centre at Shamwari Game Reserve in 1999 and has not seen him since.

13 years had passed and Alberto and his wife came to Shamwari Game Reserve especially to visit and be reunited with Kuma as this may have been their last meeting together.

Comments Dr Johan Joubert: “Alberto is an extraordinary man who is really passionate about the welfare of animals. Saving Kuma and organising the translocation to the Born Free Sanctuary at Shamwari Game Reserve was a great effort and an example to the world. Although Kuma is getting old he is still in reasonably good health. We honour Alberto for creating international awareness to the plight of wild animals in need.”