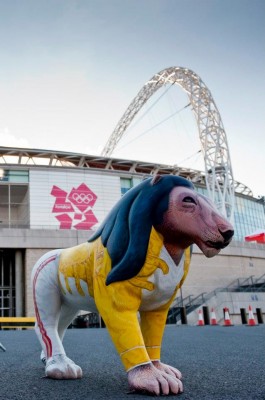 The Mercury Phoenix Trust and the Born Free Foundation, which can be found at Shamwari Game Reserve in the Eastern Cape, have joined forces to create this beautiful life-size lion sculpture, inspired by Freddie Mercury, circa 1986. This is to raise awareness of the vital work of both charities.

Freddie will be just one of 50 sponsored lions who will make up a major art installation that will prowl the V & A Waterfront in the summer of 2013 in Cape Town, South Africa, in aid of the international wildlife charity, the Born Free Foundation. Pride of Cape Town got off to a glittering start on 27th March 2012 with a stunning and memorable live performance by Queen rock legend, Brian May CBE, and the West End and Broadway singing sensation, Kerry Ellis. The evening also featured a heartfelt and moving speech by Virginia McKenna OBE, Actress and Founder of the wildlife charity, the Born Free Foundation at the Grand Café & Beach, Cape Town.

From 8 August, Freddie Lion is on a short tour of London, before starring in the auction at this year’s Freddie for a Day event at The Savoy Hotel in London, to raise funds for the Mercury Phoenix Trust and the Born Free Foundation.

The Mercury Phoenix Trust was founded in 1992 by Queen members Brian May and Roger Taylor and Queen manager Jim Beach to help distribute money raised from the 1992 Freddie Mercury Tribute Concert for AIDS awareness. Since then, the Trust has raised over $15 million to help in the fight against AIDS worldwide.