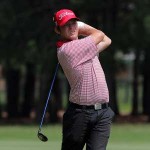 If Trevor Fisher Jnr had got things right on the two par-threes he encountered coming in, he would have been clear of the three-way share of the lead he held on Wednesday in the first round of the Wild Waves Golf Challenge.

He finished the first round of the 54-hole R600 000 tournament at the Wild Coast Sun Country Club on six-under-par 64, together with rookie Danie van Tonder and Neil Schietekat.

“I missed the par-threes’ greens,” he said, “the sixth down the hill, I looked up a bit on the chip and then on the eighth, I hit the chip a bit too far past, and it’s always tricky to sink the putts.”

But he more than compensated for any errors with a superlative stretch around the turn after he began his round on the 10th: He made eagle on the 16th, and then five consecutive birdies to race out to seven-under.

He rode the wave of good fortune for the next four holes, and he was suddenly atop the leaderboard.

“I’m happy with the round,” he said. “There were one or two little mistakes, but it’s all good.”

Van Tonder – who had to qualify for last week’s Vodacom Origins of Golf event at Selborne Park Golf Club just an hour north of the Wild Coast and then finished second – put together another great round, and he also made only two bogeys on his way to his 64.

“I’m happy with my short game,” said Van Tonder. “I was quite solid today. I’m hitting the ball well and the putting’s good.”

Schietekat finished his round with an eagle and a birdie in the final three holes after starting off with a bogey on the first. “It was a nice finish,” he said. “I got lucky on the par-five 16th when I hit a putt that was going 10-feet past and it hit the middle of the hole and went in.”

The trio led by two strokes from Daniel Greene, Desvonde Botes and Vaughn Groenewald, with a large group of seven players on three-under-par 67.

For Fisher, the quest is consistency: “It’s there and thereabouts,” he said of his game. “I’ve just got to put it all together. Day one’s over, and I’ll concentrate on tomorrow.”