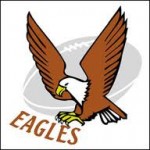 A 42 – 38 away victory for the SWD Eagles over defending champions Regent Boland Kavaliers means that the Eagles remain in contention for a place in the semi-finals in the First Division of the Absa Currie Cup – but that that Boland is out of the contest altogether.

The teams met at the Boland Stadium inWellingtonon Saturday. The Eagles led 36 – 17 at half time.

SWD Eagles manager Martin de Vos said that Boland scored a try in the first minute of the game.

“It was a bad start for us, but Dumisane Meslane quickly replied by running in a try from the line-out – and after that it all went the way we wanted for the rest of the first half.

“We scored all five of our tries in the first forty minutes.”

Mr. de Vos said that the team agreed during the break that they had to avoid becoming defensive.

“We knew that Boland would come out roaring at us, and they certainly put in a massive performance in the first twenty minutes of the second half, but in the end we dominated the play.

“Our hard work has paid off: there is no question that we were in better form than when we drew against them in the first round.” (21 – 21 on the 27th of July at the Eagles’ home ground,OuteniquaPark, in George.)

He admitted, though, that the team did make some defensive errors.

“That happens, but we’ll study the videos first thing this week as always, and then we’ll work on our weak points and reinforce our strong ones so that we’re ready for the Griffons on Saturday.

Mr. de Vos said that Dumisane Meslane was named man of the match, and that the management and players are satisfied with the five points they’ve earned out of the match. “But if we’re going to make it into the top four, we have to win both of our next two games.”

Fortunately, injuries are at a minimum for the Eagles at present.

“Clinton Wagman came off the field on Saturday after he took a bump in the ribs, and he’ll be medically assessed on Monday.

“As usual, we’ll only make a decision later in the week about whether he’ll play against the Griffons – but overall the team is looking good, and as long as we stay focused, as long as we remain modest but determined, and as long as we keep reminding ourselves that our goal at the moment is to secure that place in the semis, we’ll be in it to win it in Welkom next Saturday.”