Shamwari Group is proud to announce that local artist, Andile Dylvane has joined forces to create a unique design for Shamwari’s life-size fibreglass lion sculpture, which is part of the Pride of Cape Town public arts event set to launch at the V & A Waterfront in March 2013, masterminded by the Born Free Foundation and Wild in Art. 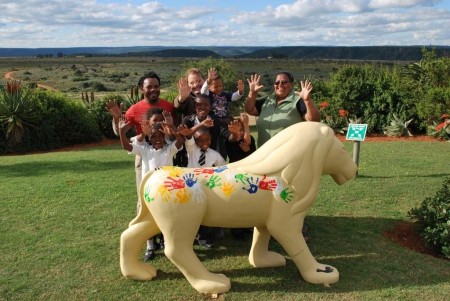 Shamwari Game Reserve, situated in the Eastern Cape, recently hosted Andile to start the paint design process. During his stay, Andile and the Born Free Foundation’s team named Shamwari’s lion ‘Qhayiya’ which means ‘pride’ in Xhosa. The local schoolchildren from Moreson Primary in Paterson were invited to help Andile and have used their handprints as the base for the design, which will soon be revealed.

Andile Dylvane is originally from the village of Ngobozana in Qobo-Qobo, in the Eastern Cape and has become a much sought after ceramic designer.

Pride of Cape Town is a public arts event which will see individually-decorated lion sculptures take to the streets of Cape Town in 2013. Each lion sculpture is sponsored by individuals or companies, who will benefit from the publicity around the campaign, and will then be auctioned for charity. All proceeds will benefit international wildlife charity the Born Free Foundation, who work around the world to stop individual wild animal suffering and protect threatened species in the wild.

Money raised from the Pride of Cape Town will help Born Free protect and conserve lions in the wild, numbers have dramatically dropped in recent years due to persecution, loss of habitat and unsustainable trophy-hunting, and also help to look after their rescued big cats at their Big Cat Sanctuary at the Shamwari Game Reserve, Port Elizabeth.

The Born Free Foundation is calling on businesses to get involved in the Pride of Cape Town and sponsor one of the lion statues that will form part of the Pride. Sponsorship brings a host of benefits and is an exciting way to both promote a business and help protect lions in the wild.

For more information about Pride of Cape Town, visit www.prideofcapetown.com

This press release was distributed on behalf of our client, Shamwari Group.

About the Born Free Foundation

From small beginnings, the Born Free Foundation has grown into a global force for wildlife. But a personal passion for wild animals and a desire for positive change remains at the heart of our charity. Born Free is not a big, anonymous organisation, but a family of like-minded people who share the same goals.

Born Free has a unique and very special history.  In 1964, Bill Travers and Virginia McKenna travelled to Kenya to star in the classic wildlife film ‘Born Free’, based on the best-selling book by Joy Adamson.  Released in 1966, the film told the true story of George and Joy Adamson’s fight to return Elsa the lioness to the wild.

The Adamson’s story was enjoyed by tens of millions around the globe, inspiring a generation, and changing the world’s attitude to lions forever.  Working with George and Joy influenced Bill and Virginia for the rest of their lives.  Their close contact with the lions sparked a lifelong commitment to wildlife and they realised wild animals belong in the wild, not incarcerated in captivity.

Born Free works to stop the exploitation of wild animals in captivity. The Foundation rescues individuals from tiny cages and gives them lifetime care in spacious sanctuaries. We work to protect threatened species in their natural habitat, working with local communities to help people and wildlife live together without conflict.

Born Free’s work in South Africa focuses on Wild Animal Rescues, Lion Conservation issues, Elephants and Rhino. Our Big Cat Rescue Centres, set in the grounds of the award-winning Shamwari Game Reserve, are currently home to 15 rescued big cats. The bush enclosures at Shamwari Game Reserve give each lion and leopard the space and privacy they so desperately need.  Visitors, including organised school parties, are allowed but are confined to one viewing platform at each camp.  The cats now have the choice whether they can be seen or not.