Only three shows in the Garden Route! Oudtshoorn, George and Mossel Bay prepare yourselves for a magical musical journey with the legendary Magna Carta. 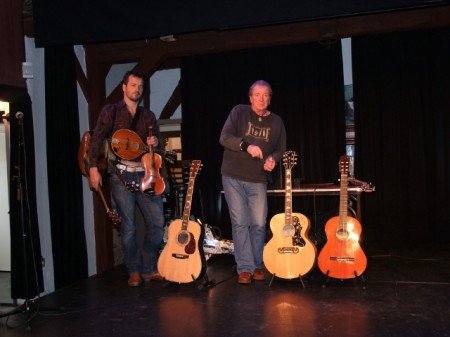 British acoustic legends Magna Carta returns to tourSouth Africain September and October for the 6th time.  Magna Carta is one of the longest running acoustic acts in the world, founded by North Yorkshireman Chris Simpson in 1969. It was the albums Seasons’ and the magnificent classic ‘Lord of the Ages’, (regarded by many in South Africa as up there with ‘Dark side of the Moon’ and ‘Sergeant Pepper’) and the evergreen single ‘Airport Song’ that put them on the world map, but do not forget the magnificent “Bridge at Knaresborough Town” which is very reminiscent of Simon and Garfunkel’s rendition of Scarborough Fair.

From London’s Royal Albert Hall with the Royal Philharmonic Orchestra to the Montreux Festival and Lisbon Opera House and the Canterbury Festival in Ontario,Canada, to the ancient souk in Damascus, Syria, their timeless music has woven its magic across every kind of audience and nationality.

Chris, the founder and soul of Magna Carta, has teamed up with dynamic multi-instrumentalist Laurens Joensen (pronounced Jo-Ansen) to do a whirlwind tour of their favourite South African venues.

The guitar work of these two musicians is one of the finest combinations of two instruments you are ever likely to hear, and there is that timeless heritage of Simpson songs spanning 42 years, 28 albums, and 84 countries visited.

Chris has just returned to the UK from Luxembourg, after performing with Jethro Tull’s Ian Anderson and Ritchie Blackmore (Deep Purple, Rainbow & Blackmore’s Night) in a 2500-seater 12th Century castle. Laurens has been touring in Sweden, and travels to the US when he has time off from his work in Amsterdam, in search of ‘true music’ and inspiration he finds in American music, bluegrass, fingerpicking-blues and gospel.

The timeless sound and songs of  Magna Carta that sold 8.000,000 albums around the world – two acoustic guitars and two voices – is exactly what you have coming at you. The Dutch/Scandinavian Joensen joins the incomparable Chris Simpson, playing slide guitar, blues and country guitar, classical guitar, banjo, mandolin, fiddle, piano, and singing. And even up against the best, Magna Carta has an enviable reputation of knowing just how to handle an audience.

With her unique eclectic mix of original music, local artist Bea Esterhuysen together with Steve Crafford will open the door for audiences to the magic that is Magna Carta.  An event not to be missed!  Magna Carta will be at Die Neelsie in Oudtshoorn on Friday 12 October, George Arts Theatre on Saturday 13 October and Die Walvissaal, Hartenbos on Tuesday 16 October.  Tickets are only R100 and are available now on Computicket or at the George Arts Theatre on 044 874 3142.  Book NOW to avoid disappointment!