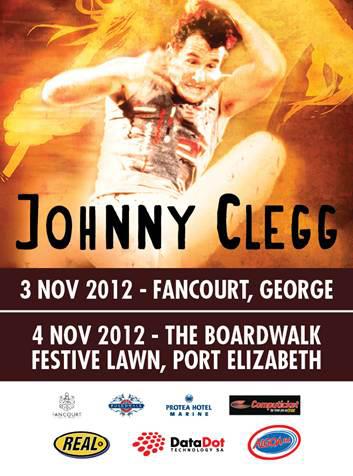 As the sun sets over the African sky in (George/Nelson Mandela Bay) the air will be filled with the memorable sounds of one of South Africa’s most iconic performers; Johnny Clegg.

Having just returned from sold out shows in America, Canada, France and Monte Carlo where he received a standing ovation at the Opera House when he performed for Prince Albert and Princess Charlene of Monaco,Johnny Clegg will be bringing his shows to Bramble Hill at Fancourt, George on Saturday 03 November and to The Boardwalk Casino and Entertainment world lawn area, Port Elizabeth on Sunday 04 November 2012.

“These concerts are proudly brought to the Eastern Cape and Garden Route by Real Concerts and Algoa FM. Algoa FM has always prided itself in bringing world class entertainment home to its listeners.With our extension into the Garden Route in December last year we are proud to dazzleand present all our listeners, from across our footprint, with the opportunity to witness the magnificent and multitalentedJohnny Clegg live in concert”, says Dave Tiltmann, Managing Director of Algoa FM.

The world-class entertainer,Johnny Clegg, is a dancer, anthropologist, singer, songwriter, academic, activist and French knight. Whilst all of these tags are fitting, none of them can accurately describe the energetic, passionate human being who has become one of South Africa`s greatest musical exports. He has campaigned against the injustice of apartheid South Africa and been instrumental in putting the new South Africa on the map as a cultural ambassador. Clegg is an icon of South African music.

During the three decades he`s been making anthemic hits, Johnny has proved himself to be an outstanding musical ambassador for his country and is known for his energetic stage performances. By combining African music structures with Celtic folk music and international rock sounds, Johnny pioneered a new and unique sound, establishing himself as South Africa`s biggest musical export. From Europe to the States, from Australia to Potchefstroom, audiences in sold out venues have danced to “Cruel, Crazy Beautiful World”, “Scatterlings of Africa”, “I Call Your Name”, “Impi”, “Great Heart”, and
“African Sky Blue”.

“DataDot is proud to be a sponsor of the Johnny Clegg concert. Johnny Clegg’s music inspires us all to create a better South Africa. DataDot strives for this goal through its commitment to creating a crime-free environment for all.”

The Protea Hotel Marine, Port Elizabeth is proud to be hosting Johnny Clegg during his stay in the city “Johnny Clegg has played such a large role in uniting cultures and sharing heritage in South Africa. He is one of the single most unifying South Africans in the recent history of this country and his message to preserve and treasure our heritage should never be lost.” – Danie Smit, General Manager, Protea Hotel Marine, Port Elizabeth.

Johnny Clegg will be joined on stage by a 6 piece band  and the audience can expect  to hear  some of Johnny Clegg’s greatest hits such as “Cruel, Crazy Beautiful World”, “Scatterlings of Africa”, “Impi”, “Great Heart” etc, as well as a couple of songs from his new album “Human” as part of this high energy, highly entertaining show.

Food stalls and bar will be provided at the venues

Tickets available at Computicket at R161 each for ADULTS; R80 for Children (6 to 13 years). Children under 6 years of age enter free of charge.

Bring your picnic blankets, camp chairs, and the family and come enjoy this afternoon sunset concert.