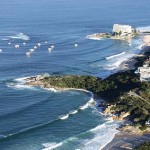 The declaration of two Blue Flag beaches in a national park is another tick in the right box for the national conservation agency SANParks in its quest to preserve biodiversity.

Now in its 25th year, Blue Flag is internationally accepted as the oldest eco-label of its type. The award goes to beaches meeting a standard of excellence.

Locally, the project is managed by the Wildlife and Environment Society of SA (Wessa) and participating local authorities.  South Africa is the first country outside Europeto be granted Blue Flag accreditation.

George and Bitou municipalities, Eden district municipality and the Garden Route initiative all put shoulders to the wheel to “make this dream reality”.

There are now 36 Blue Flag beaches in South Africa.

KwaZulu-Natalhas eight, seven on the Hibiscus Coast and one at Umhlatuze on the north coast.  Eastern Cape’s four and a single one in Northern Cape make up the remainder.