What a night it was for Zack Rasego, who won the Caddie of the Year award at the annual party laid on for the bagmen by HSBC during the World Golf Championships-HSBC Champions. 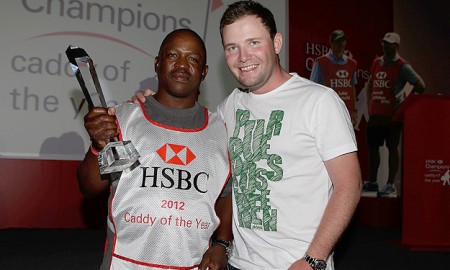 Branden Grace, Rasego’s employer, could not have been more proud as his man was awarded the coveted trophy. After holding the silverware aloft, Rasego thanked the sponsors and spoke of how honoured he felt that his peers would have voted for him.

All told, he and Grace won four times this year, with the last of those victories the Dunhill Links championship.

That week, they had a 60 over Kingsbarns, which both felt could have been a 59. But it was on the last day that Rasego really came into his own when his master was beginning to struggling on the greens.

“I told Zack, ‘Just jump in with reading the lines as I need a little clarification,'” Grace said. After that, they made birdies at the 12th, 13th and 14thto draw comfortably clear of the field.

Before linking up with Grace, Rasego caddied for Louis Oosthuizen for seven years in a partnership which would win the 2010 British Open at St Andrews. On the eve of that Open week, Oosthuizen had hinted that the time had come for them to take a break.

Rasego, though upset, “Just carried on doing my job” and, sure enough, his employer had second thoughts once they had captured the Claret Jug. Yet, the alliance was never quite the same after those doubts had been voiced, and the two split at the end of the season.

Chubby Chandler, who manages Oosthuizen, said that the partnership had maybe got a bit tired. However, Chandler predicted then that Rasego would be the best possible man for Grace when he returned to the tour at the end of 2011.

Gary Player was the first to see Rasego’s potential as a caddie.

Years ago, when he was designing the Gary Player course at Sun City, Player introduced a program for the caddies at the club and gave Rasego his own Caddie of the Year award. Part of the prize was to carry Player’s bag during a stint on the European Tour. “Zack,” said Player, ” Was a quick learner and someone who had a great eye for the job.”

Rasego made the most of that early foray on the European Tour and was soon up there with the best of the bagmen.

“Last night’s was a very popular win,” said Dennis Blasdale, a former caddie, who nowadays works in the realm of tour statistics. “Zack has always been a very good and well-liked caddie. He was also the first South African to serve on the caddies’ committee.”

Scott Vale, Brandt Snedeker’s caddie, was the runner-up in the HSBC caddie awards. The latter is known as the “Million-dollar caddie” after he was given 10 percent of the $10 million Snedeker made by winning the FedExCup title on the PGA TOUR.