THE BP Volkswagen rally team finished their 2012 season in style, claiming the top two positions at the Garden Route Rally. Hans Weijs Jnr and Björn Degandt rallied home in first place with their teammates Enzo Kuun and Guy Hodgson hot on their heels. 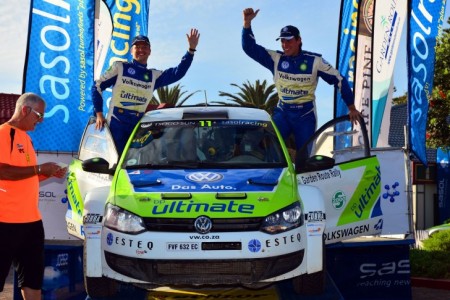 “Hans and Björn did an amazing job this weekend,” says Mike Rowe, head of Volkswagen Motorsport. “The last two rallies we’ve finished in second place, so we’ve been knocking on the door of victory, this is a great finish for the team.”

Weijs and Degandt claimed three stage wins on Friday – of the five stages that took place. They then went on to win four of the six stages on Saturday as well.

“I wanted the best result I could get after the puncture on Friday,” says Weijs. “We claimed more than three minutes back, the stage times were perfect. We pushed really hard, we took it to the limit at this event.”

Weijs and Degandt have claimed two podium finishes this season, the first being the Sasol Rally and they have now rounded off their rally year in Africa with a national rally victory.

Enzo Kuun and Guy Hodgson delivered a performance for their team that was both consistent and commanding. The pair appeared to float through the stages, hardly breaking a sweat over the two days.

“It has been a difficult year for all of us,” says Kuun. “It is nice to bring this result home, the team have been putting in a lot of hard work and this shows the depth of talent and skill, that we can pull it all together.”

“This championship is tougher than it has ever been, there are a lot of international cars where previously it was just local competition. That international technology and equipment coming into the country has lifted the standard and we all needed to lift our game.”

The final event results mark not only the BP Volkswagen team’s strengths in bringing the new BP Volkswagen Polo S2000 up to pace to compete successfully on the national championship level, but also holds the promise for what the coming season holds.

“From the Volkswagen Rally this year we have made steady progress,” says Rowe. “We’ll be doing some positive testing in the coming months to see where we can improve even more.”

For Hergen Fekken and Pierre Arries the final rally of the season shaped up to be a good one. The pair were in the top five on four of the first six stages, but were eliminated from the event on stage seven and could not complete their rally.

The Volkswagen Polo S2000 of Japie van Niekerk and Gerhard Snyman produced a good sixth place finish at the final event, besting some tough rally conditions that saw many of the competitors fall prey to punctures and other problems. Van Niekerk and Snyman finished just ahead of the BP Volkswagen Polo Vivo S2000 of Gugu Zulu and Carl Peskin.

Zulu and Peskin had already claimed the S2000 Challenge title for 2012 at the previous rally, but this did little to change their enthusiasm for competition. The pair won the S2000 Challenge category at the final event as well – in seventh overall and more than three minutes ahead of their nearest class rivals.

In class S1600 the BP Volkswagen Polo Vivo of Megan Verlaque and Hilton Auffray were keen to finish their year in the class on a high note. After two tough days of rallying the duo brought their car home for fifth place in the class.

The 11 stage event that saw competitors finish the 2012 season in the picturesque Wilderness and Knysna area witnessed some stellar rally performances and, while drawing the curtain on the 2012 season, also hints at an exciting and demanding 2013.