The Department of Cultural affairs and sport has successfully rolled out the Eden Drama festival this year all over the Eden District. From development workshops to adjudication showcases. The festival is now reaching its climax with the Finale taking place on the 24th November 2012 at Riversdale town hall in Riversdale. This event is proudly hosted by the Hessequa Municipality.

There are 6 Finalist from Plettenberg, Knysna , George and from the Host town Riversdale. Adjudicators from the Baxter Theatre will chose two production out of the 6 who will represent Eden at the Suidoosterfees where the Eden/West Coast Drama Festival will take place. These two groups will then also be given an opportunity to perform at next years Zabalaza Festival held annually at the Baxter Theatre.

The Mayor of Hessequa Municipality, Director of Arts,Culture and Language, Ceo of the Baxter Theatre will all be in attendance as well as the Local Organising committee of the Festival. 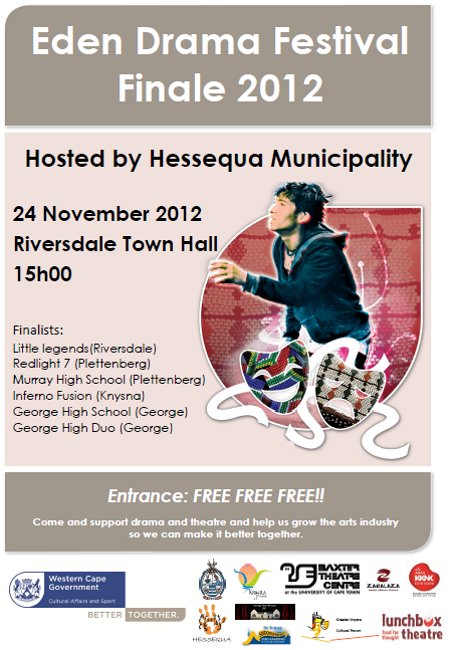