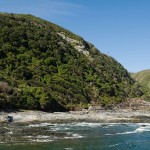 These conferences seem to produce more hot air than tangible results and even if you follow environmental issues in the news with interest, climate change always seems to be happening somewhere else, far away – in the atmosphere, where average global temperatures are rising, on the US East Coast, where storms are getting more vicious, and in the thawing Arctic.

But what about us, here on the southern tip of Africa? There’s a real shortage of news about exactly how climate change is going to affect our lives. Which is why I was quite excited to come across a report that analyses what’s in store for an area loved by many South Africans, the Garden Route. It was actually published last year, but it’s still very relevant now.

But what about us, here on the southern tip of Africa? There’s a real shortage of news about exactly how climate change is going to affect our lives. Which is why I was quite excited to come across a report that analyses what’s in store for an area loved by many South Africans, the Garden Route. It was actually published last year, but it’s still very relevant now.

The study, a collaboration between the WWF, the United Nations Environment Programme Finance Initiative, researchers from UCT and the CSIR, and Santam, was motivated by the fact that the insurance industry is having to deal with a growing number of damage claims resulting from natural disasters. It considers the impact of climate change in the Western Cape’s Eden District Municipality which includes Gouritsmond, Mossel Bay, George, Sedgefield, Knysna and Plettenberg Bay.

Here are the findings in a nutshell:

– Winter and spring temperatures in the region have risen by about 1.4 degrees Celsius over the past hundred years and are predicted to increase by a further 1 degree Celsius by 2040.

– With a sea level rise of a metre expected by 2100, extreme wave run-up events are predicted to increase by six times (wave run-up, which refers to the maximum vertical level above the still water line reached by wave uprush on the shoreline, can cause significant erosion).

Interestingly, the report highlights the fact that the impacts of humans on the natural environment in the region are of equal or greater importance than the expected effects of climate change itself. The authors point out that:

– the introduction of invasive alien trees has increased the number of fire risk areas by over 30%;

– the degradation of wetlands and  riparian zones along rivers, large fires in commercial forest plantations, as well as the clear-felling of such plantations without active rehabilitation, have all diminished the environment’s natural capacity to effectively deal with major rainfall events; and

– the destruction of foredunes has reduced natural protection against storm surges and sea level rise.

While this may all be rather depressing, there’s good news, too: “proactive management and restoration of these ecological systems has the potential to offset most of the future increases in risk related to climatic changes.”

In other words, if fire-prone invasive trees in the area are eradicated or managed more effectively, if wetlands and riparian zones are rehabilitated and if foredunes are repaired and protected, we’ll go a long way towards offsetting the expected effects of climate change.

That doesn’t sound very hard to accomplish. And while you and I have no chance of influencing the multilateral talks at COP 18, we are much more likely to make an impression locally. If we live on theGarden Routeor go on holiday there, we can talk to others about these protective measures, get actively involved with organisations which are already working to implement them and raise awareness about their importance among public servants and representatives on the municipal level.

Disclaimer: News24 encourages freedom of speech and the expression of diverse views. The views of columnists published on News24 are therefore their own and do not necessarily represent the views of News24.