MEN FOR CHANGE WESTERN CAPE Provincial Champion, Brigadier André Lincoln and Public Relations Officer, Warrant Officer Andries Douglas, will embark on the First Annual Enduro Ride, called Riding for Change.  This will coincide with the International 16 Days of Activism for No Violence Against Women and Children campaign. 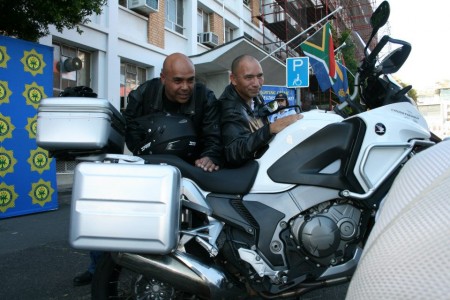 They will depart Cape Town on November 26th, with Dual On/Off Road Motorbikes, sponsored by Honda, on a 16 day trail run, visiting remote rural Police stations in every cluster within the Western Cape.  Together, they will empower communities along the way. Their focus will be on Intimate Partner Violence, Family Violence, Alcohol and Drug abuse as well as Self Defense.  Both Brigadier Lincoln and WO Douglas are skilled Martial artists, proficient in Karate, Kobudo, Judo and other forms of combat.

These two pivotal agents of Change will also be assisted by a technical team in a back-up vehicle, and joined by Bikers all over the Western Cape.  All bikers are welcome to join in the Mass Ride, meeting the Riding for Change team outside towns and to participate in all crime awareness activities.

They will also make use of this Road Show to motivate fellow Police members and to mentor young constables along the way.  Rural Police stations will include Murrasyburg, Beaufort West, Ceres, Bitterfontein, Vredendal, Barrydale, Bredasdorp, Citrusdal, Ladismith, Oudshoorn, Plettenberg Bay, George and many more!

Their return to Cape Town will coincide with the SAPS Provincial 16 Days event, on Monday, December 10th.

‘Men for Change’ is a forum within the South African Police Service and its members are police officers who choose to make a difference within the respective Stations, Clusters, Provinces and Communities where they serve.  MFC also addresses issues such as nutrition, fitness, wellness, police killings, lifestyle, and mentorship etcetera.

For further information on this event and to request the Route Plan, contact
WO Andries Douglas
Email: andries@dissipline.co.za