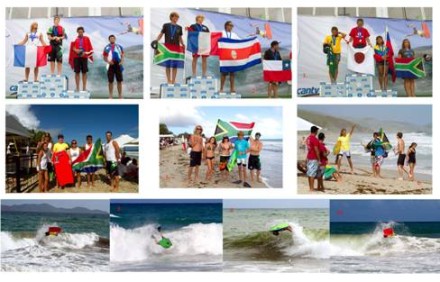 15 year-old Tristan Roberts (BOL) won a silver medal in the U18 division and Pamela Bowren (EP) placed 4th in the women’s final.

Matthew Lombard (BOL) in the mens division and Georgi McKeaone (SKZN) in the U18 girls were eliminated prior to the finals.

Team manager, Sean Oberholzer said “It was a great event and our team was very proud to representSouth Africaat the World Championship. Coming fromSouth Africa, we were not used to surfing the smaller waves ofVenezuela. Nevertheless, the team didSouth Africaproud and brought back one gold and produced three finalists. The top four teams were very close in the overall points, so I am happy with the results.”

TeamBrazilwas the overall winner of the event, with Brazilian rider, Eder Luciano winning the mens title.

South African Champion, Tristan Roberts narrowly lost out on the Boys title to young Frenchman, Maxime Castillo. According to Sean Oberholzer: “Tristan was leading for the majority of the final heat and surfed a more technical heat, but Castillo caught a bigger wave in the final minutes and pulled off some clean manoeuvres to clinch the title.”

Pamela Bowren, started strong in her final heat, but narrowly missed the bronze medal in the women’s division in a difficult battle with local Venezuelan, Yuleiner Gonzalez. IBA World champion Isabela De Souza (Brazil) and Sari Ohhara(Japan) battled it out for fist and second respectively.

“I am stoked to have made it to the women’s final, as this was my goal, but would have preferred to have placed higher in the final. I am still happy with fourth place and overall it was a great experience!” said a proud Pamela.

The South African highlight of the championship was definitely Iain Campbell’s epic win in a thrilling final of the Drop Knee division.Campbellcame up against world champion, Peruvian Cesar Bauer and French Martin Mouradian, both of whom started off aggressively. But 2 good waves in the final minutes changed it all, as Iain Campbell didn’t miss a wave and catapulted into first place – bringing the gold back toSouth Africa!

SABAruns bodyboarding inSouth Africa. A non-profit organisation operating for the aim of developing and nurturing new bodyboarding talent, as well as providing rules and structure to contests from club level to national level.

SABAis an affiliate member of Surfing South Africa (SSA). SurfingSouth Africais the recognised governing body for all forms of surfriding inSouth Africaand is a member of the SA Sports Confederation and Olympic Committee (SASCOC) and the International Surfing Association (ISA).