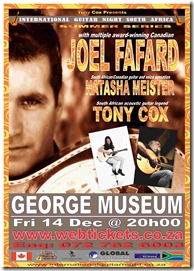 ‘This season of International Guitar Night is not to be missed’ – Michael Britton, Bizcommunity –3 Dec 2012

‘Fafard alone would be worth the nights’ price of admission’ – Theresa Smith, Cape Argus –5 Dec 2012

International Guitar Night South Africa hits the road for the first time this coming summer.  Once the main set of shows ends in Cape Town, IGNSA heads off on a tour of the East Coast that sees this remarkable series of world-class shows appearing at select venues between Cape Town and Plettenberg Bay.

IGNSA’s summer series 2012 brings a focus onto those acoustic guitar players who not only play the guitar purely instrumentally but who also use their skills to provide a scintillating and multi-textured accompaniment to their voices. This is in contrast to what is promulgated as the norm, whereby the song is sung with a bland strumming of the chords behind the voice.

Canadian Joel Fafard is a perfect example of this art and brings his evocative, thought provoking and hilarious show to Cape Town for IGN’s summer series. Local acoustic guitar guru, Tony Cox has toured extensively with Fafard in Canada and has this to say of the man…

‘Joel is one of the true gents of this world, ridiculously talented, just simply a great player, great singer, humble and so very down-to-earth…in his shows, he gets all this across and delivers it all with a deadpan sense of humour, the combination is just killer!’

Also on the bill is another Canadian who is making a name for herself in South Africa and IGN’s first female guitarist, Natasha Meister…along with the show’s creator, South African acoustic guitar guru, Tony Cox.

International Guitar Night is a series of performances held every summer and winter to bring to our South African doorstep the world’s greatest and most accomplished acoustic guitar players of the world today. IGN’s main focus is on those players who use their right-hand fingers to individually pluck the strings creating bass, rhythm, melody and percussive lines all at the same time, like a mini-orchestra coaxed out by the fingers of the right hand.