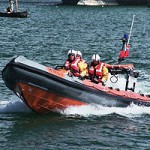 The Trans Agulhas Challenge, described as one of the world’s toughest inflatable boat races, see two Capetonians David Kalis and Phillip Buffiet entering to create awareness for The City Mission, a charity focusing on the plight of impoverished communities in theWestern Cape.

The 700km race, covered in five days, starts in Plettenberg Bayon 28 December 2012, drawing thousands of tourists to the southeast coast every year. With stages in Mossel Bay, Stillbaai, Struisbaai and Hermanus, the event concludes on New Year’s Day in Strand. Edited coverage will be broadcast on SuperSport, early in 2013.

“The City Mission celebrates its 110th birthday this year,” Kalis says. “It has helped thousands of people in poor communities in the city, ranging from feeding schemes to assistance with basic services such as clean drinking water and support with HIV/AIDS treatment and counselling. It is one of Cape Town’s oldest NPO’s and I wanted to do my bit to raise awareness about the good work that it is doing.”

Competing in the race is no easy feat. According to organisers, the event struggled to take off when they first started approaching sponsors in 1988 because it was considered “too dangerous,” with contestants facing the risk of dehydration, kidney damage and broken bones on the waves.

“But I love a challenge,” Kalis says, which is evident when looking at his resume, which includes a brief career in the military, a stint as a 4×4 instructor and an exciting run as a stuntman in movies alongside such stars as Robert Pattison, Tom Cruise and Samuel L Jackson. “It’s hard and uncomfortable, but my motivation is that it is equally difficult for individuals in some of the poorer communities in Cape Town are. I’m doing it for them.”

He is challenging companies in the Western Cape to support both the racers and the charity. “So far, Tuff Guard Goodwood and Builders’ Warehouse have supported the initiative, but I am hoping to others will join them in sponsoring teams and the Mission. It’s a shame that a lack of funds denies promising young racers access to the sport.”

For more information, go to http://www.legionair.co.za/