One of the great “old school” gravel road passes in the mountains north of Mossel Bay. It was replaced by a more modern tarred pass which has left few vehicles on the old road, besides local farmers. It is well worth the effort of driving the 12 kms of gravel road through a substantial part of South African history.

The Robinson Pass is a modern classic of the Southern Cape with beautiful sweeping curves and superb views around every corner. It connects the coastal port of Mossel Bay with Oudtshoorn. The pass has been rebuilt several times over the past 140 years.

This easy tarred pass lies on the R328 between Mossel Bay and Herbertsdale and ends on the banks of the Gouritz River amongst green fields.

Schoemans Poort connects Oudtshoorn with the Cango Caves. It also doubles as the feeder route to the village of Prince Albert via the fabulous Swartberg Pass. This is the lesser of the three major poorts through this mountainous region. The others are Meirings Poort and the Seweweeks Poort. 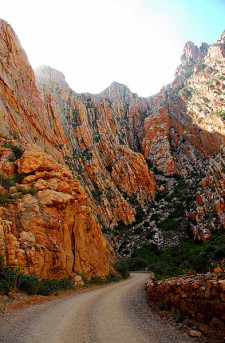 The spectacular [1] Swartberg Pass runs through the Swartberg mountains (black mountain in Afrikaans) which are a mountain range that runs roughly east-west along the northern edge of the semi-arid area called the Little Karoo in the Western Cape province of South Africa.

The Swartberg is amongst the best exposed fold mountain chains in the world, and the pass slices through magnificently scenic geological formations [2]. To the north of the range lies the other large semi-arid area in South Africa, the Great Karoo. Much of the Swartberg is part of a UNESCO World Heritage Site.

It was built using convict labour by Thomas Bain and opened on 10 January 1888. The drystone work supporting some of its picturesque hairpin bends is particularly noteworthy.

The pass runs between Oudtshoorn in the south and Prince Albert in the north. The pass is not tarred and can be a little treacherous after rain, but offers spectacular views over the Little Karoo to the south and the Great Karoo to the north. The plant life along the pass is very interesting, many hundreds of species being found on the Swartberg [3].

The Swartberg pass was built between 1881 and 1888 by Thomas Bain, son of the famous Andrew Geddes Bain who built Bain’s Kloof Pass and many more. The dry-stone retaining walls are still in place and almost 120 years old.

The pass is especially famous due to the spectacular geology that is exposed at its Northern end. The contortions in the rock display astonishing anticlines and synclines, and the vivid coloration of the surrounding Quartzite is remarkable. At the Northern end of the pass seven hundred metre high quartzite cliffs of the upper Table Mountain Group can be seen, and these are often tilted through 90 degrees (sometimes even more) [4]. Arguably the most famous of all these cliff faces is the spectacular ‘Wall of Fire‘.

One of the most iconic gravel roads in South Africa. It represents almost pilgrimage status to gravel road fans, as it winds through 37 kms of rugged mountain scenery, culminating in the vertigo inducing, single width Elands Pass, which terminates in the very hot, low altitude Gamkaskloof, no doubt giving the almost oasis like valley the odd name of The Hell.

Part 2 of the Gamkaskloof route should not be watched before viewing Part 1. It covers 18 kilometers of this rugged and dangerous road starting from the 15th kilometer and terminating at the 33rd kilometer, just before commencing the big descent down the Elands Pass to Die Hel. Take it easy and stop frequently to enjoy the spectacular scenery all around you.

The Elands Pass is something to behold and nailbiting to drive.

Die Hel (The Hell) is probably the most inappropriately named place on the planet, but the drive getting there is arduous enough! This is the fourth and final part of the series on the Gamkaskloof.

The Kredouw Pass lies along the beautiful Prince Albert Valley, on the R407 between the town of Prince Albert and the farming hamlet of Klaarstroom. within the northern section of the awe inspiring Swartberg mountain range.

Meiringspoort is a Top 10 destination. This is Part 1 of a 3 part series on the poort. be sure to watch all three. The poort bears a tough history of floods and landslides amongst incredible hardships, yet our engineers and road builders mastered the art of building a magnificent road through this awe-inspiring poort. BRAND NEW VIDEO UPLOADED!

If you only have time to make one stop on your trip through Meirings Poort, then make sure it is at the Interpretive Centre and main waterfall. If you are lucky to be there after good rains, you will be in for a treat.

This series of videos on the poort is best watched in the correct sequence. Part 3 and the final video on this masterpiece of nature. It starts at the Interpretive Centre and waterfall and ends some 10 kms later as the poort gives way to farm lands just outside the village of De Rust.

The historic “Seven Passes” route between George and Knysna includes the Black River Pass or ‘Swartrivier Pass’ or in it’s original format “Zwartrivierhoogte Pass”- a modern, tar road with smooth, sweeping bends making this pass seem almost effortless as it runs from the main road in George past the imposing Garden Route Dam wall to cross over the Swart River and quickly rise up to the neck at Saasveld via a big S-bend.

Brand new video in HD has just been uploaded (Dec 2012). The historic “Seven Passes” route between George and Knysna includes ‘Kaaimansgat’ – a twisting, turning tarred road, close to the town of George, which passes down through heavy, lushly indigenous forest to this area’s famous ‘black water’ rivers.

The Silver River Pass, is one of the Garden Route’s ‘Seven Passes’, and covers 2,68 km of narrow, tar-road driving, descending to and from the Silver River and finding its end at picturesque Wilderness Heights. (Circa 1882.) BRAND NEW VIDEO UPLOADED!

Karatara Pass is found on the ‘Seven Passes Road’ immediately after the ForestryVillage of the same name.

The Thomas Bain-built “Seven Passes” route between George and Knysna features the Hoogekraal Pass, covering 5.83 kms of breathtakingly beautiful views along its narrow gravel road. It descends to and from the Hoogekraal River, and ends just past the Geelhoutsvlei Timber Mill – another Garden Route location, rooted in the history of the Knysna woodcutters. This pass ends near the hamlet of Barrington.

Lying 6th in the string of ‘Seven Passes’ between George and Knysna, the narrow, gravel Homtini Pass covers 5km of wonderfully scenic driving, descending to the river from which it takes its name, and ends at the Rheenendal Timber Mill. This pass is also known as the Goukamma River Pass.

The mysteriously named Phantom Pass is the final pass on the Garden Route’s string of “Seven Passes” between George and Knysna. 7.4km of narrow, gravel road descends to the famously picturesque Knysna River Lagoon, and finds its end-point at the N2. The other passes are the Swartrivier (Zwartrivierhoogte), Kaaimansgat, Silver River,Touwrivier (Duiwelskop), Hoogekraal, Karatara, and Homtini (Goukamma River Pass) passes. NEW VIDEO UPLOADED!

George to Knysna [Off the beaten track]

This short pass makes up for its lack of length in providing magnificent scenery of lakes, rivers, gorges and ravines amongst dense indigenous forests and pine plantations on the higher mountain slopes. It is one of several access roads between the N2 highway and the ever popular Old Cape Road or 7 Passes Road. This one is a gem and not used by many vehicles, so it’s usually peaceful and quiet as its a sort of “road to nowhere”.

The Gouna Pass is a gravel road branching off the Old Cape Road close to the Simola Golf Estate. It is a spectacular drive through dense indigenous forests and amber, tumbling rivers. It is also known as Kom se pad pass.

This beautiful drive through the lush indigenous forests in the mountains north of Knysna, takes about an hour, as it winds its way east or west (depending on direction of travel). It is technically not a pass, but well deserving of being featured on this website for it’s tranquility and pure feeling of being deep in the forests.

The Kaaimans RiverPass boasts several records. Although a fairly short pass in terms of distance, the curves are extremely sharp and the gradient is steep.

This was the first road between George and Oudtshoorn. The MontaguPass was opened in 1847, having taken 3 years to build by some 250 convicts at a cost of 35,000 Pounds Sterling. It lays claim to being the oldest, unaltered pass still in use in South Africa and covers 7,4 kms of magnificently scenic narrow, gravel road driving, ascending to the tiny hamlet of Heroldt, on the northern side of the Outeniqua Mountains. NEW HD VIDEO UPLOADED!

Part 2 of the video on Montagu Pass covers the higher section starting from the old blacksmith’s shop all the way over the summit and ends at the narrow bridge on the descent towards Heroldt. It is advisable to watch Part 1 first.

The Outeniqua Pass is a relatively modern pass connecting the coastal town of George with Oudtshoorn and the Little Karoo. It was first built in 1951 to replace and provide an alternative to the Montagu Pass. It has been widened and modernized several times since then and today carries the bulk of the traffic flow between the two towns and the Langkloof.

This quiet village road is actually nicer to walk than to drive. It’s not an oficial pass – just a quiet meander down an old style, narrow country lane alongside the TouwRiver estuary. It forms part of one of the hiking trails starting at the Wilderness National Park. There is always birdsong in the air and if you’re lucky you might see a bushbuck.