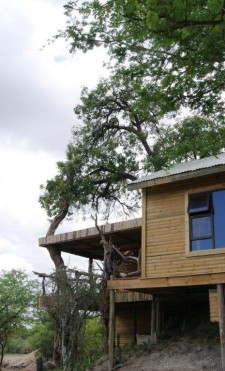 The Hoedspruit Endangered Species Centre (HESC), situated in the Limpopo Provence, sister property to Camp Jabulani, is proud to open its first cottage, self-catering accommodation in February 2013 which is also perfect for families and especially for those who want to learn more about wildlife rehabilitation.

The cottage, which has not yet been named, is situated in a five hectare camp which is surrounded by ten teenage cheetahs that are roaming around, exercising and playing within the camp. The cottage was built on stilts on top of an ant heap and has a wild gardenia tree in the middle of it which acts as an umbrella creating shade for the cottage.

The 5 star cottage has three bedrooms and three bathrooms which sleeps six adults and four children with ease and is equipped with high quality bed linen and furniture. The cottage also has an open plan kitchen and deck overlooking the beautiful views of the reserve and near by small dam and indigenous trees.

The purpose of the cottage is not only to provide guests with great accommodation but also to assist the Hoedspruit Endangered Species Centre with funds where necessary.

This press release has been distributed on behalf of our client, the Hoedspruit Endangered Species Centre.