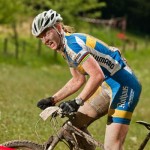 There will be no easing into 2013 for South Africa’s top mountain bike marathon racers. The Attakwas Extreme Challenge in Oudtshoorn is regarded by most as the toughest single-day marathon race in the country and on Saturday, the seventh edition will guarantee another brutal season-opening test.

It’s unlikely any of the Attakwas Extreme Challenge entrants will have felt comfortable resting on Christmas Day. Indeed, most probably trained. The formidable 121km route, which incorporates the unforgiving dry, stony Karoo terrain, will include just under 3000 metres of climbing, with around two thirds of that in the final half of the race.

Heading up the men’s line-up is reigning South African Marathon Champion, Max Knox (Specialized) and defending champion, Matthys Beukes (CangoMTB.com). For Beukes, who lives nearby, there’s a definite homeground advantage, but Knox’s run of victories in the final quarter of 2012 make him a significant threat to Beukes’ quest for back-to-back wins.

Neither are likely to have the same form as their South African rivals following a bitterly cold European winter, but they’ve both been in South Africa over recent weeks wouldn’t have entered if they didn’t believe their form was good enough for a shot at the title.

Also on the entry list are former Cape Epic women’s winners, Sharon Laws and Hanlie Booyens. Laws is the current British Road Race Champion, but will once again be teaming up with Booyens for the 2013 Cape Epic and will use Attakwas as a key form tester.

The veteran men’s (over 40) category is once again expected to be a hotly contested division and includes Robert Sim and Nico Pfitzenmaier, winners of the veteran title at the 2012 Bridge Cape Pioneer Trek stage race, which took place over some of the same route as Attakwas in October last year.

In the short history of the race, podium contenders have never been as plentiful. This is partly due to the Attakwas Extreme Challenge being named by Cycling South Africa as one of eight qualifying events for national team selection to the 2013 Marathon World Championships; and partly because it’s the best form tester for the ABSA Cape Epic, the world’s premier mountain bike stage race, which takes place in March. There’s just enough time (56 days) before the Cape Epic to still alter the training for riders that face Attakwas disappointment.

The Mini-Atta, a shorter, 56km option, is still filling up and is likely to top the 300-rider mark come race day. Entries (with a late fee) are still available at registration on Friday. For more information, visit http://www.atta.co.za/ or call Carel on 082 379 1177.