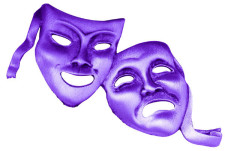 The South African theatre community is gearing up for the much anticipated ‘Take a child to the theatre today’ 2013 campaign which encourages South Africa’s youngest citizens to become audiences for theatre.

The World Day for Theatre for Children and Young People is celebrated annually by ASSITEJ centres from across the globe on 20 March. This international association of theatre for children and young people (active in almost 90 countries) and its partners are working together to unite theatres across the world in conveying one message: “Take a child to the theatre today”.

Michael Morpurgo will be writing this year’s World Day Message to inspire all to join the campaign. Morpurgo is the third Children’s Laureate, and writer of numerous children’s books, including War Horse which has been powerfully translated to the stage, in a visionary collaboration with South African Handspring Puppet Company.

In South Africa the campaign is particularly vital given that the majority of children in our country do not have access to theatre. “Giving children an opportunity to dream, to imagine other possibilities for their lives, to engage with and empathise with people and situations from very different walks of life to their own, is an important gift every child deserves to receive. Clem Sunter has described one of the ten most fundamental aspects of the 21st century as being that we have moved from the Age of Knowledge to the Age of Intelligence. This means teaching children not knowledge but cognitive skills, and one of the most powerful ways of doing this is through theatre,” says Yvette Hardie, director of ASSITEJ SA and president of ASSITEJ International.

“The ‘Take a child to the theatre today’ campaign goes to the heart of what ASSITEJ is all about, working to ensure that all children and young people have access to the arts wherever they happen to live. We ask emerging and established theatres and theatre companies across the country to join hands and reach out to new audiences in community halls, schools, professional theatres and site specific venues. Last year our work in deprived communities such as Bodibe village (North West province), Sterkspruit (Eastern Cape), the Hillbrow inner city (Gauteng) and Vrygrond (Western Cape), to give just a few examples, has shown us just how desperately children need the arts as a transformative impulse. We want young people everywhere to experience the liberating power of the imagination,” says Hardie.

Among the theatre houses that have come out in support of the 2013 campaign are Artscape Theatre, Joburg Theatre, Catalina Theatre, Tshwane Youth Theatre, Klein Libertas Teater, St. Anne’s College Theatre KKNK Festival, Rhumbelow Theatre, Dorpo Straat Teater, Hilbrow Theatre Project, Pierneef Teater, Theatre on the Bay, National Children’s Theatre, Masque Theatre, Old Mutual Theatre on the Square and Breytenbach Teater among others. The press launch on Tuesday, 19 February will give more information about the strategies that these theatres are using to engage with young audiences on and around World Theatre Day.

“We are calling on corporate sponsors, the public sector, the general public ,as well as the arts industry, across the country to join the campaign, so that we’re able to reach as many children as possible to ensure that we continuously encourage sustainability and growth of the arts sector,” said Hardie.

Over 7500 children attended theatrical events in honour of the day, an inspiring start for the three-year-long global campaign initiated by ASSITEJ to advocate for the value of theatre in the lives of children and young people. Numerous high profile volunteers gave of their time to bring attention to the message.

All South Africans can make a small but important contribution of R10 by texting ‘Theatre4Youth’ to 38490 from their mobile phones, thereby sponsoring children and youth to visit the theatre on and around World Theatre Day.

Along with the campaign this year, ASSITEJ South Africa in partnership with Theatre Arts Admin Collective (TAAC) and Lunchbox Theatre will be launching the annual Family Season Festival of performances in Cape Town and for the first time, in Plettenberg Bay to provide opportunities for children and young people from lower to middle income families to see high quality theatre. The festival also support local theatre practitioners and theatre companies to create more high quality theatre for our children, ensuring that theatre becomes an inspiring part of their cultural and family life, as well as their education.

Family Seasons are small, locally-based festivals, in areas which generally do not have access to theatre. They rely on the involvement of a network of local funders who are all deeply invested in the future of the children within that particular community. The festivals run partially over the school term and partially over holidays, drawing on school and family audiences. Performances will include the Musho award-winning production, Fishy Flippers, Jon Keevy’s Get Kracken (which was developed through an ASSITEJ programme), Jori Snell’s Standard Bank Ovation award-winning Kitchen Fables in a Cookie Jar, Lunchbox Theatre’s The Whale Show and From Addo to Adventure and Laway Arts’ Red Earth.

The festival will take place from Wednesday, 20 to Thursday, 28 March at Vrygrond/Capricorn and Observatory, Cape Town as well as from Monday, 8 to Sunday, 14 April in Plettenberg Bay.

For more information on the campaign or the Family Seasons of Performances, please contact Themba Mzondi, ASSITEJ SA marketing and fundraising manager on 021 822 0070/1/2 or email fundmarket@assitej.org.za.