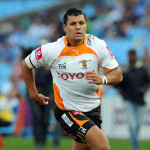 The hosts had to be content with just a single try, through tighthead prop Grant Kemp and a second-half penalty from fullback Elric van Vuuren.

The Eagles made a fine start to the match when Kemp rumbled his way over after just four minutes but the hosts’ lead was short lived as the Free State XV struck back five minutes later through a converted try from Claassen.

De Bruyn then nailed three penalties as the Free State XV went to the break holding a handy 11-point lead.

The second half belonged almost exclusively to the visitors but they only really broke free of their tenacious opponents in the last quarter.

De Bruyn succeeded with a 47th minute penalty but the men from Bloemfontein had to wait until the 61st minute before they troubled the scorers again when veteran Fredericks scooted over for an unconverted score.

De Bruyn popped another penalty over and, two minutes before the end, the Free State XV grabbed their third try when left wing Erasmus, who played for Pukke in last year’s FNB Varsity Cup, dotted down for a converted try.