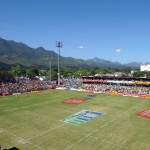 The Easter Championships will take place at Outeniqua Park in George from 28 March to 1 April and feature the top eight qualifiers from the pool stages of the inaugural Cell C Community Cup, which is currently being played at club venues across the country.

“With just 24 of the 40 pool matches played, we’ve already seen just what an impact the Cell C Community Cup has had in its inaugural season and the Easter Championships promises to provide a fitting climax to a watershed year in club rugby,” said SARU CEO, Jurie Roux. “Club rugby is all about communities coming out in numbers to support their teams, and it’s for this reason that we decided to make the tickets as affordable as possible.

“For just R100 per match day, a family of five will be able to watch the eight best ‘open’ clubs in the country battle it out to become the first team to lift to iconic Gold Cup on Easter Monday.”

Cell C Chief Commercial Officer, Jose Dos Santos, echoed Roux’s thoughts when he said: “Cell C decided to become involved in the Community Cup because we wanted to make a lasting contribution to a favourite South African pastime and we have already seen first-hand the positive effect it’s had in places such as Wellington, Welkom and White River.”

The Cell C Community Cup Easter Championships kick off on Thursday 28 March with four Cup quarter-finals, followed by Cup and Bowl semi-finals on 30 March and Cup, Plate, Bowl and Shield Finals on Easter Monday. All matches will take place at Outeniqua Park and will be televised live on SuperSport.