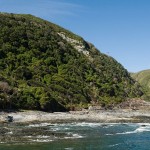 Voters rated the scenic route, on the N2 between Port Elizabeth and Cape Town, for its abundance of wild flowers, secluded bays and quaint villages.

Australia’s 290 km Great Ocean Road. built by soldiers during WW2, pipped the Garden Route in No. 5.