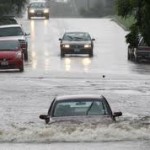 Cape Town – The city’s disaster risk management centre is on high alert as the Western Cape braces for a cold front accompanied by heavy rains and gale force winds.

“It is likely that the expected heavy rainfall will cause localised flooding across the CapePeninsula,” Solomons-Johannes said.

“This may be exacerbated by the fact that the water table in the CapeFlats is already very high as a result of recent rains.”

The city’s disaster team was hard at work on Tuesday at informal settlements in Khayelitsha and Gugulethu, cleaning stormwater drains of blockages caused by mud and sand, among other things, said Solomons-Johannes.

“We are also clearing paths for emergency service access.”

SA Weather Service forecaster and meteorologist Henning Grobler said the cold front would be accompanied by “on and off” rain showers.

“Heavy rainfall of 50mm is expected in the Cape Town metro and Overberg. There is a small chance of flooding. The rain will start clearing by tomorrow morning. Fine and sunny conditions are expected over the weekend,” Grobler said.

A resident of Europe informal settlement in Gugulethu, Sinezwi Radebe, said the community was preparing for the winter months.

The informal settlement is one of many in the city that is seriously affected by flooding every year.

Radebe said residents had started digging trenches outside their homes to allow for easy water flow.

“That’s all we can do for now. We have to wait for it to see what damage the rain will cause. Usually it’s bad, with water seeping into our shacks from the roof and the floor,” he said.

How to weather wet and wild conditions

The city’s tips to residents to prevent wind and fire damage to their homes:

* Install straps or additional clips to your roof to secure it to the frame structure, in order to prevent roof damage.

* Trim trees and shrubs around your home.

* Protect windows and doors with covers or wind shutters.

* Keep a watchful eye on open flames and extinguish them before going to bed (including candles, lamps and paraffin stoves)