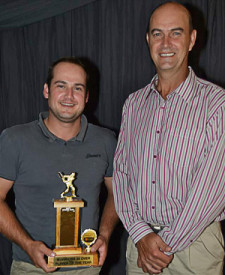 SWD’s Christiaan Jonker was awarded as the Chevrolet Warriors RAM Slam T20 player of the season at the Warriors function that was held at De Kelder restaurant in Port Elizabeth last week. The trophy was handed-over by Warriors coach, Piet Botha (right).

Jean Heunis from South Western Districts was included in a 28-player National U/19 training camp that will be held in Pretoria between 4 and 7 July this year. The camp will be held in preparation for the ICC U/19 World Cup that will take place in Dubai in the United Arab Emirates in February next year.

The SWD Cricket Board recently announced a group of fourteen players for the 2013 Academy Intake. Various local players will be invited for a second year whist the SWD Schools captain for 2012, Ruan Stander, will have a great opportunity to develop his career.

Hanno Kotze, a wicket/keeper batsman from the Boland, who was the Cricket South Africa Schools Twenty20 player in 2012 and is currently a cricket bursary student at the NMMU campus in George is also included in the intake.

The intake will run between May and September and will conclude with the annual CSA Academies week that will be hosted in Oudtshoorn between 16-19 September this year.