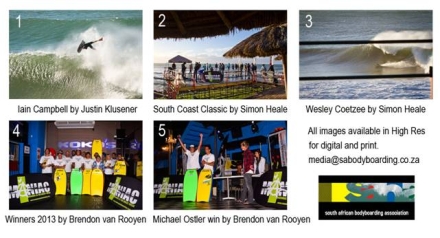 Margate, South Africa – The 15th annual South Coast Classic took place this past weekend in Margate and again illustrated why the beaches of Kwa-Zulu Natal are so popular with surfers and bodyboarders. The ocean produced some large waves with ideal offshore winds, making for some impressive board riding.

Although, at times the conditions could be tricky, the competitors from the young Boys Division all the way through to the Pro Division made the best of each wave and produced some really big aerial moves, backflips and inverts. The divisions that produced some of the best spectator heats were the Juniors, where South African champion, Tristan Roberts(Boland) dominated his earlier heats but lost out in the final to Western Province rider, Ian Viljoen. The Pro Division delighted from the first with huge inverts and massive backflips. The final included Southern KZN local, Terence Pieters, Mark McCarthy(Northern KZN) and Durbanites, Michael Ostler and Iain Campbell.

The Pro Final was an incredible one, with technical and big wave riding showing off their skills. Michael Ostler, Iain Campbell and Mark McCarthy pulled off huge inverts, while Mark and Terence Pieters brought massive backflips into the mix. The competition was fierce and the Pro riders gave the crowd an awesome show! Michael Ostler came out on top with his final invert giving him that one up on the other riders.

“I am over the moon with the SABA win! I had been training really hard and I have been enjoying riding so much lately that to secure a win in such testing conditions was a good result for me,” said Michael Ostler. Fellow Durban rider, Iain Campbell took top honours in the Drop Knee division, his second win in this division already this year.

I am over the moon with the SABA win! I had been training really hard and i have been enjoying riding so much lately to secure a win in such testing conditions was such a good result for me.

The next event on the South African Bodyboarding Calendar is the Wedge Classic, held in Plettenberg Bay – the longest running bodyboarding contest in South Africa.