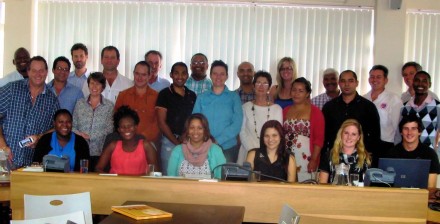 The programme, which started in January has included the following  components:

•Stakeholder analysis in consultation with municipality contact person and key stakeholders;
•Undertake a climate vulnerability assessment, examining vulnerability to current as well as projected climate impacts;
•Identify adaptation interventions aimed at reducing these risks;
•Prioritising interventions according to risk, municipal priorities, funding, capacity and other requirements.
•Develop an Adaptation Plan of Action for the entire district inclusive of all the B municipalities.

The adaptation programme led by Penny Price of the Climate Change Directorate and Vernon Gibbs-Halls of Eden District Municipality has incorporated the active engagement of the B municipalities within Eden, all of which have contributed to the process of identifying climate change vulnerabilities and creating interventions for all of Eden’s residents to adapt to extreme weather patterns, control the outbreak of diseases, strenthen natural ecological services and build resilience and promote more robust structures to withstand floods. Alternative agricultural practices have also been considered to adapt to prolionged droughts and flooding associated with extreme climatic trends. The programme will follow a similar pattern as the Eden District MCoastal Management programme in which all B municipalities contribute to a District wide Plan to benefit individual B municipalities in seeking climate change adaptation interventions.

The COP17 held in Durban in 2011 where the Eden District Municipality arranged for various learners throughout the District to deliver presentations marked the beginning of Eden’s strong commitment to both climate change mitigation and adaptation. Vernon Gibbs-Halls remarked that “ The United Nations Climate Change Conference, Durban 2011, delivered a breakthrough on the international community’s response to climate change. In the second largest meeting of its kind, the negotiations advanced, in a balanced fashion, the implementation of the Convention and the Kyoto Protocol, Bali Plan, and the Cancun Agreement. The outcomes included a decision by Parties to adopt a universal legal agreement on climate change as soon as possible, and no later than 2015.”