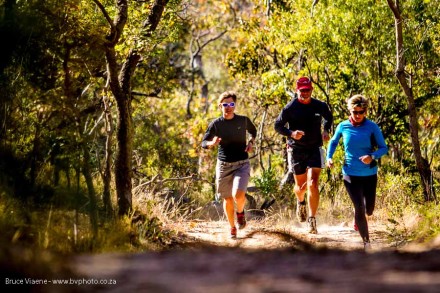 Nedbank and TriSport have teamed up to bring you an exceptionally unique race that will throw runners into a trail paradise. The Nedbank Save the Rhino Trail Run consists of all the elements which will make this race one to remember.  Sonja Otto explains, “The different thing that this race presents is that runners will run through a game reserve and see animals like impala, giraffe, lion, wildebeest, elephants and, of course, rhino”.

As you run, you leave behind a footprint amongst the animal prints that have gone before you – there is something special, even magical, about sharing a route with Africa’s wildest!  The race is held at the Legend Entabeni Safari Lodge in Limpopo and is home to the magnificent Big 5. Entabeni is aptly named – meaning the place of the mountain in the local language. Covering more than 22 000 hectares of bushveld, ravines, savannah, sandy wetlands, wooded hills and mountainous ridges there are few, if any, races in South Africa that bring such diversity to trail runners.

With over 432 rhinos poached already this year, we have to move from talking to action. That is why Sonja and Hano Otto, from TriSport, have created this trail run to fund and bring awareness to this tragedy that we allow to happen on our doorstep. 100% of the entryfees from this race will go towards WWF in aid of Rhino Conservation. This could not happen without the help of Nedbank – a driving force in the conservation of rhinos

The race is over two days. Day One: runners will be completing a 27km course which will start, and finish, at the Wild Side Safari Lodge. Runners will head up on to the upper escarpment into the Waterberg Mountains – with majestic views of the valleys and kloofs below. Water points along the route are provided. You might be tempted to hang around a bit longer as you soak up the views.  Day Two: A vastly different 23km experience which will bring the runners onto the lower escarpment with predominately single track that has been carved out by the local elephant herd. The thick bush brings cover to the many different antelope, so don’t be too surprised if one greets you along the trail! Game vehicles will be taking your supporters to view points and water tables to be able to cheer you on and share the experience with you.

This is going to be something special. From being out in the open and running with a variety of wild animals around you to the reason why this race is being held: To Help Save the Rhino.