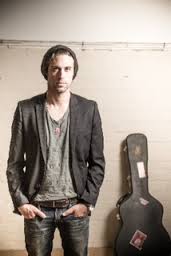 Dan Patlansky has been described as a “conglomerate of charisma, charm and musical genius” and he’s back with his first acoustic album Wooden Thoughts, to be released at a concert in Kirstenbosch Gardens in Cape Town on March 21.

It’s an album that Patlansky has aspired to do for a long time: “I’ve always wanted to do an acoustic album but finally decided to do it following my successful unplugged tour last year. I realised there was a demand for it. As a musician, it allows you to play something different and it is less flashy. It also lends itself to a wide range of genres that allowed me to stretch myself,” he explains.

On Wooden Thoughts Patlansky sings and plays acoustic guitar, slide guitar , Dobro and the mandolin. He is joined by Clint Falconer on bass and Andy Maritz on Cajon. Wendy Oldfield does backing vocals on the track Miss Oowee as well as on The Weight.

Patlansky, who produced the album himself, is delighted that it was recorded in the Knysna forest by Howard Butcher – a specialist recorder who has produced among others Guy Buttery, Steve Newman and Nibs van der Spuy.

20 Stones was voted one of the Top 20 blues albums in the world; Daddy’s Old Gun was nominated as one of the top singles for 2012 by Rolling Stone SA,  and Patlanksy is hoping that this new album will also make waves and do as well. Dan will be undertaking an extensive tour throughout South Africa as well as performing in Europethis year including a performance at the Denmark Blues Festival.

In only a little over a decade on the music scene, Dan Patlansky has become one of the busiest and most respected blues artists to ever come out of South Africa.

After his debut, Standing at the Station,  an independent album that amazed critics and garnered Dan a reputation as  a Blues-phenomenon and his subsequent “Readers Choice” vote as “Best Blues Guitarist in Southern Africa” – Dan released a second album, True Blueswhich was produced and released by EMI on the famed Blue Note label in 2004. Dan is one of the only South Africans to ever achieve “Blue Note” status.

In 2006 Fender Guitars recognised Dan’s fiery playing and offered him an endorsement deal to promote Fender Guitars and amps. Dan is one of only six Fender endorsed guitarists in South Africa.

In February 2005 and again in July 2006, Selwyn Miller, New Orleans based manager of David Gates and Bread, Randy Crawford, and Petula Clark amongst others, brought Dan to New Orleans to showcase this amazing talent.

In his time living in the city of the Blues, Patlansky performed at legendary venues such as Maple Leaf, Rock & Bowl and Checkpoint Charlie with many Blues giants such as Henry Gray (Howlin’ Wolf’s Pianist), Snooks Eaglin, The Batiste Family and Rockin Dopsie Jr. While abroad, Dan performed live on both television and radio.

He continues to perform all over South Africa and internationally in the company of world-renowned musicians.