Dehydration occurs when there isn’t enough water to replace what’s lost throughout the day. Your system literally dries out. Sometimes dehydration occurs for simple reasons: You don’t drink enough because you’re sick or busy, or because you lack access to safe drinking water when you’re travelling, hiking or camping. Other dehydration causes include diarrhea, vomiting, fever and excessive sweating.

Signs of dehydration include the following: You may be more thirsty than usual, your mouth and eyes may be dry, dark urine or passing no urine for more than 8 hours, dizziness, not feeling alert and able to think clearly.

Unfortunately, thirst isn’t always a reliable gauge of the body’s need for water, especially in children and older adults. A better indicator is the colour of your urine: Clear or light-coloured urine means you’re well hydrated, where as a dark yellow or amber colour usually signals dehydration.

Anyone can become dehydrated if they lose too many fluids. But certain people are at greater risk, including:

Older adults. As you age, you become more susceptible to dehydration for several reasons: Your body’s ability to conserve water is reduced, your thirst sense becomes less acute and you’re less able to respond to changes in temperature. What’s more, older adults, especially people in nursing homes or living alone, tend to eat less than younger people do and sometimes may forget to eat or drink altogether.

People with chronic illnesses. Having uncontrolled or untreated diabetes puts you at high risk of dehydration. But other chronic illnesses also make you more likely to become dehydrated. These include kidney disease, alcoholism and adrenal gland disorders. Even having a cold or sore throat makes you more susceptible to dehydration because you’re less likely to feel like eating or drinking when you’re sick. A fever increases dehydration even more.

Endurance athletes. Anyone who exercises can become dehydrated, especially in hot, humid conditions or at high altitudes. But athletes who train for and participate in ultra marathons, triathlons, mountain climbing expeditions and cycling tournaments are at particularly high risk. That’s because the longer you exercise, the more difficult it is to stay hydrated. During exercise, your body may lose more water than it can absorb. With every hour you exercise, your fluid debt increases. Dehydration is also cumulative over a period of days, which means you can become dehydrated with even a moderate exercise routine if you don’t drink enough to replace what you lose on a daily basis.

People working or exercising outside in hot, humid weather. When it’s hot and humid, your risk of dehydration and heat illness increases. That’s because when the air is humid, sweat can’t evaporate and cool you as quickly as it normally does, and this can lead to an increased body temperature and the need for more fluids.

Testimonial:  A very big thank you to the guys from Dynaforce to help me out with all my nutritional needs!! JC Visser. 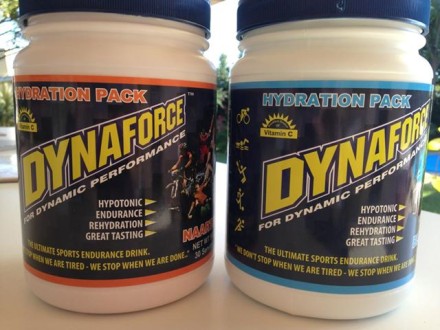