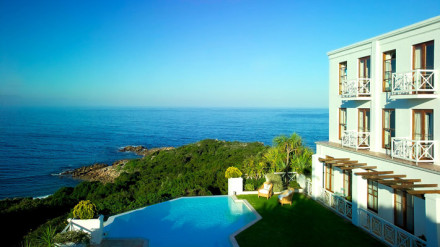 A steady optimism is starting to emerge among the purchasers of vacation and retirement homes in the area. South Africans are leading the resurgence, but Britons and Germans—long the strongest foreign buying contingents here—are close behind.

“We are seeing more and more international investors returning and a growing number of inquiries from South African buyers, particularly for upmarket homes,” says Ling Dobson, who markets properties for Pam Golding Properties.

Ms. Dobson focuses on properties in Knysna and PlettenbergBay, the two most popular vacation destinations along the route, which winds between the mountains and the coast of the Indian Ocean, from Heidelberg to StormsRiver.

The company’s sales in Knysna (pronounced NIGHS-na), a town known for its dramatic cliffs overlooking a beautiful lagoon, its water sports and its oysters, totaled $2.7 million in March and April, compared with $1.4 million in the same period last year. Ms. Dobson recently sold a four-bedroom home on the Pezula private golf estate for $2.3 million. The glass-front home is built on one of the sea cliffs at the entrance to the Knysna lagoon; the buyer, a South African, has views of the Indian Ocean.

Much of the Garden Route is experiencing the housing-market resurgence—particularly from Sedgefield, a sleepy village in the east that attracts retirees, to the increasingly popular western town of Mossel Bay, a destination for golfers and bargain-house hunters. The recovery along the route, however, is uneven. In Knysna, for example, prices are stuck well below their 2008 peak.

“The period after the 2008 peak has been characterized by slow demand and an oversupply of properties for sale,” says Sotheby’s International Realty’s Peter Mare about the Knysna market.

Foreign investment flooded into South Africa during the postapartheid boom years, when the country was settling into its new democracy. International visitors stayed to buy summer vacation homes and that, coupled with local investment, caused property prices to surge. But the global economic crisis turned the country’s healthy 5.5% growth into a 1.5% contraction in two years, and its path to recovery since 2009 has wavered.

The vacation-property sector still lags behind the country’s primary residential housing market. Average house prices in holiday towns grew 0.9% in 2012, after falling 5.2% the previous year, according to First National Bank’s property barometer. By comparison, prices have grown by about 3.8% in South Africa’s major metropolitan areas over the past two years.

The market is finding its legs again. As sellers in Knysna drop prices to meet falling demand, Mr. Mare says, “we now find ourselves at a point where most properties are now fairly valued.”

And because the U.S. dollar has strengthened 50% against the South African rand over the past two years, buyers are finding more bang for the international buck.

Sotheby’s is marketing two properties on ThesenIsland, a marina development of 19 man-made islands built on the Knysna lagoon. The area is popular with the lock-up-and-go vacation-property buyer. There is little outside maintenance—yards are small because the emphasis is on decks and access to the canals and lagoon for boating—and the development is gated. One of the properties is a three-bedroom house with a pool that overlooks the lagoon and cliffs for $697,400.

Seeff Property Services, a national real-estate company, also has listed a home on the lagoon: a four-bedroom, four-bathroom house with a large deck and pool for $787,000.

Plettenberg Bay—which calls itself “the whale capital of the world” because humpbacks linger nearby on their migratory path and southern right whales calve in the bay—is one of the strongest housing markets in the area. Average property prices have increased to $243,000 in 2012 from $204,000 in 2010, according to the South African Property Transfer Guide, which collates deeds data.

There are still plenty of bargains to be found, however. More than 1,000 homes are listed for sale in Plett, as it is known, representing about 10% of total properties, says Sotheby’s agent Steven Neufeld. A two-bedroom or three-bedroom, fixer-upper in Plett can be had for 950,000 rand ($94,600). In 2007, a similar home would have cost 1.4 million rand.

On Plett’s higher end, Seeff is marketing a four-bedroom riverside villa on the Twin Rivers gated estate for $991,200 that caters to the security-conscious luxury buyer.

PlettenbergBay is firmly geared toward the vacation crowd, with only 20% to 25% of the population living there year-round. Those who come just for a visit do so for the beaches, lagoon and Robberg nature reserve, making the city one of the most popular holiday destinations in South Africa and swelling its population in the busy summer months, especially in December.

Howard Allum and his wife, Amanda, just bought a $298,900 four-bedroom house in PlettenbergBay for their retirement. The British couple have been living in France since 2008, but have long spent their winters in South Africa.

“We’re buying now because I will be 70 next year and it’s a ‘now or never’ situation for me,” says Mr. Allum. “As for prices, they’re a lot cheaper than in Europe and growing cheaper by the day with the exchange-rate changes recently.”

Says Billy Rautenbach, a local agent for Seeff: “It seems that many buyers who have been waiting on the sidelines for prices to drop are realizing that they are unlikely to drop any further and are looking to get into the market while the going is good.”