Scintillating dance moves and outfits the highlight of the night

The much anticipated return to South African television screens of popular international dance show, Strictly Come Dancing went off in spectacular fashion as professional Latin and Ballroom dancers with their celebrity partners lit the dance floor on fire during last night’s live broadcast on SABC3.

Hosted by the witty Marc Lottering and charming Pabi Moloi, the sixth season quickly shifted into gear as the celebrities and the dance partners walked in clad in glittering outfits and hair to match.

First on the dance floor was the alluring beauty of Connie Ferguson with partner Brandon Eilers and they certainly lived up to their billing by giving a very elegant and classically composed Waltz that quickly set the bar and proved very popular with the judging panel and audience alike.

The ever bubbly and outspoken socialite Kuli Roberts and partner Sylvester Sefotlhelo gave a very energetic and high tempo Cha Cha that certainly got everyone talking and saw Kuli Roberts live up to her billing as an entertainer.

Gorgeous Lalla Hirayama partnered by Grant Esterhuizen followed with a very stylish and sophisticated Waltz that was performed to near inch perfection and could not be faulted by the judging panel and received a near standing ovation from the packed ballroom.

Up next was Zakeeya Patel with partner Ryan Hammond with their edgy interpretation of the popular Cha Cha that certainly caught the crowd’s attention with its inventiveness and racy nature and almost blew the roof off the building and firmly announced them as amongst the favourites.

Closing off the high octane evening was actress Jay Anstey with her partner Tsholo Moholowane with a well-rehearsed and beautifully executed Waltz that was certainly one of the highlights of a highly entertaining night and brought the evening to a close in style.

Following a short snippet of an entertaining Men’s Group SALSA Dance, the leader board showed that Lalla Hirayama and Grant Esterhuizen have taken an early lead, closely followed by Zakeeya Patel and Ryan Hammond; in third place is Jay Anstey and Tsholo Moholowane then Connie Ferguson and lastly Kuli Roberts and Sylvester Sefotlhelo. Judges scores from last night’s show will be carried to the third episode where the couple with the lowest scores and audience votes will be eliminated.

Don’t miss Strictly Come Dancing next week Wednesday 17 July on SABC3 at 20:00 to see what the Male celebrities will bring to the dance floor. 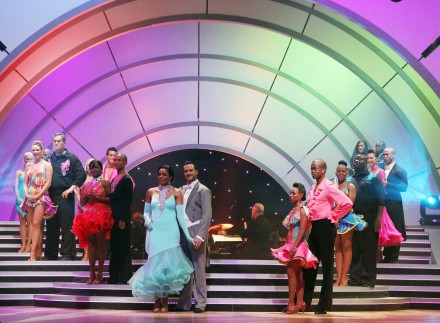