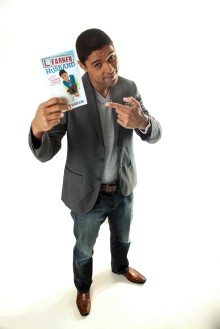 Presented by Old Mutual and DStv

Fresh from touring the country with his one man show, “Money’s Too Tight To Mention” for which he recently released a DVD – critically acclaimed Stuart Taylor returns with a very unique offering in the form of “The Learner Husband Book Launch Tour” which will be in Johannesburg on 9 – 10 August 2013 at The Lyric Theatre.

Known to many as “The King of Relationship Comedy”, Taylor has spent years performing the successful show, “Learner Husband” and has finally put together the book; “Learner Husband – A Handy guide for avoiding collisions with your wife”. He refers to it as the unofficial guide to marriage that every couple should read.

Bound to be like stand – up comedy on steroids, the “Learner Husband Book Launch Tour” will give audiences a live representation of what to expect in the book. The show will take a look at marriage in the 21st century and will also ensure that everyone can take some lessons home with them, as told by your “funny” guy next door from his own experiences (and those of others.)

Directed by Fleur du Cap award winning director Heinrich Reisenhofer, this comedic analysis of relationships will definitely appeal to any audience; elderly couples to recently engaged “newbies”, single students to housewives – there will be something in it for everyone.

With over a decade of performing comedy at the highest level, Stuart Taylor can undoubetdly be described as a true South African comedy heavyweight. His impressive body of work has won him several awards including, Best Overall Comedy at the National Arts Festival and the Showtime Award for Best Solo Performance.  He has earned rave reviews for his performances at the Edinburgh Fringe Festival, Scotland; the Berlin International Comedy Festival, Germany, as well as at the Auckland International Comedy Festival in New Zealand.

Taylor’s ability to interrogate the human condition, explore people, their sensibilities…hopes, dreams, ambitions and fears, illuminating how they interact with each other, exposing  similarities and differences alike – has made him stand out in a cluttered comedy industry.

Tickets for the one man show at The Lyric Theatre, on the 9th and 10th of August are available online at www.computicket.co.za or at Computicket outlets nationwide for R100.

The book retails for R120; and a combo of the book plus two tickets is available for only R300. In addition, there will be book signings after the show.

The Learner Husband Book Launch Tour is proudly brought to you by Old Mutual and DStv and is produced by Podium…The Comedy Merchants.