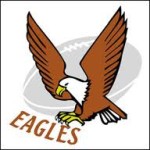 The SWD Eagles clinched an open and entertaining encounter against the Leopards at Profert Olen Park in Potchefstroom on Friday as the visitors completed a 50-47 (halftime 20-16) victory with 11 tries being scored between the sides, in the ABSA Currie Cup First Division match.

The home side started briskly and secured 96% of the possession within the first 12 minutes. The bright start brought just reward when Hennie Skorbinski sent Morne Hanekom over for the opening try after 6 minutes. The outside centre drew two defenders brilliantly which opened a gap for the eighthman to cross the line. Adriaan Engelbrecht converted the try to give the hosts a seven point lead.

Engelbrecht extended the lead to 10 points when he knocked over a monstrous penalty from about 10 metres inside his own half just three minutes later, although the flyhalf was assisted with a strong breeze at his back.

The Eagles looked nervous to begin with, but once their nerves settled down, they began to assert themselves. Luvuyiso Lusaseni was penalised for taking the man without the ball and the visitors kicked for touch. The Eagles kept the pressure on the Leopards’ line and crossed the chalk with Shaun Raubenheimer dragging two defenders with him. The flanker stretched across the line, despite having the two defenders hanging onto him, although he injured his ankle in the process and was replaced by Dumisane Meslane. Justin van Staden converted to reduce the deficit to just three points.

George Tossel broke brilliantly from his own 22 metre area and raced down the field but was brought down just five metres short by Clinton Wagman. The Eagles were penalised shortly thereafter for being offside at the ruck, and Engelbrecht converted to make the score 13-7. But the Eagles struck back with a penalty of their own through Van Staden just a minute later.

The Eagles then took the lead for the first time when Meslane broke through the defense to score close to the posts after the visitors took a quick tap when they were awarded a free-kick from a scrum. Luther Banks St Charles Obi could have extended the lead just four minutes later but was lazy in dotting the ball down and lost it forward.

Both sides traded penalties in the closing stages of the first half, although the gap could have been just one point as Engelbrecht missed a relatively easy penalty.

The second half started badly for the Eagles as Schalk Oelofse was given a yellow card for slapping the Leopards captain, Brendon Snyman, through the face. The hosts kicked for touch and then mauled the ball all of 20 metres with Edgar Marutlulle scoring. The hooker controlled the ball well at the back of the maul as the visitors could not stop the juggernaught with just 14 men.

But the Eagles levelled the scores when Van Staden knocked over his third penalty when the Leopards were penalised for being off their feet at the ruck. Just two minutes later, Johann Laker burst over the line from the base of a ruck after Henro Swart fell agonisingly short, but the move was started by Obi as the left winger bolted down the left hand touchline. Engelbrecht missed the conversion to leave the hosts five points ahead.

Hanekom scored his second try after 56 minutes, after he controlled the ball at the back of the scrum wonderfully. Engelbrecht converted the try to take the score to 35-26 after Van Staden had knocked over a penalty just a few minutes earlier.

Van Staden narrowed the gap to seven points by slotting his fifth penalty of the match on the 60-minute mark. Shortly thereafter, Peet van der Walt was yellow carded, leaving the Leopards with only 14 men. The visitors took complete control and ran in two tries through Martin du Toit and Gerrit Smith, both of which were converted by Van Staden.

Alshaun Bock, who has snatched two hat-tricks this season already, was sent flying after Smith broke through the Leopards defense. Van Staden brought up the 50 mark with the conversion, which also took his personal tally to 25 points.

With just five minutes remaining in the game, the Eagles seemed to relax, thinking that the match was won at 50-35, but a great fightback from the home team saw Jarryd Buys saunter across the line, coming into the backline on the angle which threw the Eagles’ defence off guard. Martin Dreyer then fought his way over the line with just one minute left of the clock to reduce the deficit to just three points as Engelbrect could only convert one of the tries.

The difference between the two teams on the night was the boot of the Eagles’ fullback, Justin van Staden, who ended the match with a 100% record, while Engelbrecht missed two conversions and a penalty.

The victory for the visitors moves them onto 22 points on the First Division log, level with the Leopards, who picked up two points for scoring more than four tries and losing by less than seven points. Both teams are still five points adrift of the log-leading Steval Pumas who have won six out of six matches.