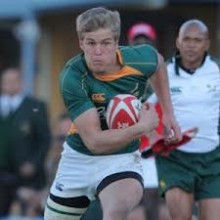 The SA Schools team on Friday overcame a determined England outfit in their opening match of the Under-18 International Series at City Park stadium in Cape Town for a 19-14 victory and a strong start to the series.

The clash proved to be thrilling, as both sides showed fantastic skills, brute physicality and put in a series of big hits.

England stamped their authority early on with No8 James Chisholm scoring their first try in the fourth minute following a powerful scrum for a 7-0 lead.

SA, however, hit back with the team retaining possession and showing good skills by off-loading in the tackle, which earned them a penalty. Grant Hermanus, who was in fine form for Western Province at the Coca-Cola Craven Week, made the most of the opportunity and reduced the score to 7-3.

This bolstered SA’s confidence and prompted them to retain possession and apply pressure on England, but unfortunately penalties and turnovers at crucial times denied them a few try-scoring opportunities.

The team, however, showed patience on attack and continued to string together phases, and they earned the rewards with inspirational captain and No8 Rikus Bothma scoring their first try of the match in the 19th minute from solid forward play. This handed the hosts a narrow 8-7 lead.

The second quarter, however, proved to be a hard grind as the forwards battled it and out and both teams tightened up their defence.

England, however, got a sniff of the tryline in the dying seconds of the first half, but the tenacious SA defence shut them out to maintain their one-point lead at the break.

The home team continued to assert their authority in the second half and made their way to England’s half where they camped for a few minutes.

A fantastic inside pass to wing Duhan van der Merwe after stringing together a few phases on attack, saw the player dance his way through the defence for their second try. Unfortunately, however, the conversion proved unsuccessful.

But England hit back instantaneously with Chisholm scoring his second try after picking up the ball from the base of the scrum and breaking through to cross the tryline. Olver converted to hand the team a 14-13 lead.

This lead, however, was short-lived as Brandon Thomson slotted over the team’s second penalty to sneak back into a two-point lead, and fortunately for SA, they managed to maintain this until the end.

With the scores close both teams refused to give an inch which resulted in hard-fought third quarter.

England, however, used their effective rolling maul well to get onto the front-foot and work their way into SA’s half. But an intercept by Thomson and quick numbers at the breakdowns earned the home side another penalty, which Thomson converted for a 19-14 lead.

England fought back with intent until the dying seconds, but their efforts were countered by the determined SA defence, which sealed the victory.