Acclaimed South African photographer Grant Leversha has received the highest international recognition for his latest project, Within an African Eden: Golf Courses of South Africa, which has won the gold in three major international publishing/printing awards hosted in the USA for 2013. 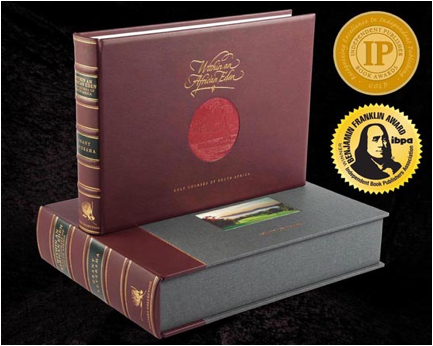 Leversha’s opus features his best golf course photography of South Africa’s most iconic courses as well as a brief history of each, and has been crafted to the highest standards of publishing, from the full-leather binding to the calligraphy, illustrations and printing. The complete book weighs 15 kilogrammes and, when opened out, measures one metre in width.

The collection includes 1000 numbered copies, of which twenty-six comprise the Masters Collection and 950 the Premier Collection. The balance are artist’s copies. Both collections are endorsed with forewords by Johann Rupert, Gary Player, Jack Nicklaus, Ernie Els, Nick Price, Peter Matkovich and Ronald Fream, while the Masters Collection is signed by each. The interest in the book has been phenomenal, with only one of the twenty-six signed Masters Collection still available. Many of South Africa’s captains of industry and serious book collectors have embraced the project wholeheartedly. The global footprint is also growing with collectors from the USA, Canada, Europe and the East subscribing to the work.

“In the independent publishing world these are considered the ‘Oscars’ and I am hugely encouraged that experts in the field of publishing and art books have recognized this work to be worthy of such accolades,” said Leversha.

“When I conceived the idea to produce a work on golf courses in South Africa, my vision was to set a new publishing standard and I decided from the outset that the end result would be a sumptuous work of art.

“Every aspect in the production of this work has been carefully researched, and I engaged only the best of professional craftspeople in their respective fields.”

“I am equally proud that this is going to prove to be a lasting legacy to golf in South Africa. The game is in good hands and these awards together with the increasing global footprint of collectors, will ensure South African golf and South Africa as a country is well showcased.”

Born and raised in Durban, South Africa, Grant has for the past 25 years resided in Umhlanga Rocks, a short drive north of the city. After leaving school, Grant joined the merchant navy and his initiation into the world of business started in 1985 when he chose to pursue a career in corporate finance with Barclays Industrial Finance. In 1989 he started a small flexible packaging business, eventually selling this fledgling company to follow his passion for photography.

In 1992, Grant followed the Springbok Rugby Team and spent months at a time travelling with the national side during the era of longer tours and was the official photographer to Francois Pienaar’s RWC ’95 champions and also was the official SARFU Photographer until 2004.

In the 1990s Grant’s love of golf course photography led to him rapidly establishing himself as the country’s top artist in his field. With a string of awards to his name, his work was soon seen in almost every golfing corner of the country.

His work has appeared on the covers and pages of many golfing publications, including Golf Digest South Africa, Compleat Golfer and countless other publications around the world promoting courses and tournaments in South Africa. Most, if not all of South Africa’s highest-ranked golf courses use his material in promoting their courses, resorts and establishments. Gary Player and Jack Nicklaus feature his work in their respective official calendars, and for their design businesses. In international golfing circles, Grant is regarded as being one of the preeminent golf course photographers.

For further information, please contact Grant Leversha on +27 82 9900908 or grant@grantleversha.com.