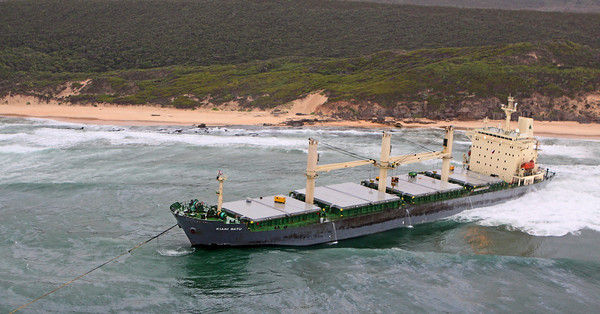 Salvage masters were aboard the stricken Kiani Satu yesterday, working to assess the damage after the vessel was freed from a sandbank and towed out to sea, ending nine days of tireless work by hundreds of people.

By about 3pm the ship was the desired 10 miles from shore off Buffels Bay in the Southern Cape – the required distance to signal that the danger was over.

This was preceded by “a very dangerous stage”, when risks included the tow rope potentially snapping, the ship bottoming again in shallow water or, in the worst-case scenario, sinking, according to Captain Nigel Campbell, of the SA Maritime Safety Authority.

Once the damage is assessed, Campbell and his team will decide on the next steps.

“We’re celebrating, but we are not in the clear yet. The weather is abysmal,” he said late yesterday.

The team has been battling insufficient swell – which hampered five attempts to refloat the German-owned vessel – since Tuesday.

It was sixth time lucky yesterday, despite very rough sea conditions, strong winds and icy weather. At about 11.20am the 168 metre vessel began moving out to sea, followed by loud cheers from the 332-member team who have been working around the clock to salvage the ship.

Massive waves battered the ship, with some breaking over it as it was being towed.

“We decided to start towing yesterday morning when the swell increased, and she just started to move farther and farther away from the shore,” an elated Campbell said.

The ship ran aground last Thursday after mechanical failure en route to Gabon.

From Tuesday the crew started towing at every high tide, but small swells hampered efforts and they were only able to swing the vessel around so the bow was facing seawards. To lighten the load the salvage crew managed to airlift more than 600kg of spoiled food and more than eight tons of oil off the ship in plastic tanks on Friday.

Now the clean-up crew will move in after more than 15 tons of oil and fuel leaked into the ocean through a crack in one of the ship’s damaged tanks. Although the layer of oil around the ship had been broken up, some washed up on a stretch of beach along the Goukamma Nature Reserve.

Clean-up operations were expected to begin today, depending on weather conditions.

By yesterday more than 35 oiled penguins had been rescued, cleaned and sent to rehabilitation centres in the Eastern and Western Cape. Joint Operations Centre spokesman Athane Scholtz said. Although the clean-up time was unclear, it could take weeks to complete. – Weekend Argus