It’s down to the Top 5 on Strictly Come Dancing

With all the couples revving up the contest and putting on their A game, the entertainment was spectacular and the competition was fierce. Sadly, Jay Antsey & Tsholo Moholwane had to hang up their dancing shoes as they were forced to bow out of Strictly Come Dancing. The judges dropped them after a close dance off with Mpho Popps & Nombulelo Hlathi who – for the third consecutive time – survived it by the skin of their teeth. 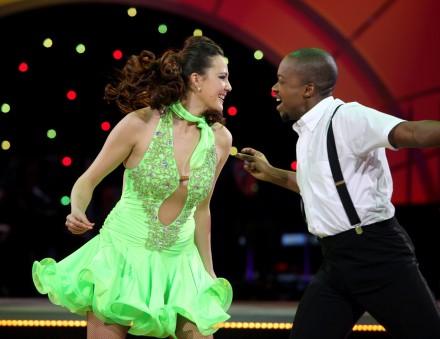 The judges decided to keep Mpho Popps and Nomulelo Hlathi in the competition because they believed the couple has the staying power and fighting spirit to soldier on.

The betting man’s favourites for the title Lalla Hirayama and Grant Esterhuizen kicked off the evening with an electrifying Jive taking the competition to stratospheric heights. The judges were unanimous in their accolades and praise and were just shy of awarding them a perfect 30 points.

Dance off or not, Mpho Popps and Nombulelo Hlathi redeemed themselves with a sensual waltz. They thrilled the judges and the studio audience and proved that they are back in the competition. It can’t get any lower for the couple and all they can do is to catapult themselves to higher levels.

The rapidly improving duo of Graeme Richards and Lindsey Muckle took on the Cha Cha and the judges were impressed. Although they did point out that the Cha Cha is meant to be smooth rather than choppy, they commended the couple for their entertaining performance and encouraged them to work on their timing issues.

Having slipped a bit from their mighty standards last week, potential favourites Zakeeya Patel and Ryan Hammond put on a flawless performance. A joyful, captivating Viennese waltz – likened to a performance of an international competitive standard, and earning them the first 10 in the competition.

Creative pair Thapelo Mokoena and Hayley Bennet’s Viennese Waltz elicited gasps and screams of delight as the pair showed they are not showbiz professionals for nothing. Not only was their performance melodramatic, thematic and captivating, it wowed the judges and the studio audience.

For something different and a break from the competition – all the contestants came together to put their best show feet forward with a spicy, colourful and energetic Bollywood dance.

It is now down to the final five and the competition is well and truly blistering hot. Viewer votes continue to throw a spanner in the works and it is anyone’s guess, who will survive next week.

At the end of the night the leader board read as follows;