The Table Mountain Blues Summit 2013  is set to give you a musical thrill that`s gonna groove your mojo soul! SA`s premier Blues Festival has found a new home at the Hillcrest Quarry in Durbanville and on 22 and 23 November, the Cream of South Africa’s Blues- Rock Artists will be taking the stage:

Now in its 8th year with the continued help of main sponsor Combustion Technology and also Paul Bothner Music, The Table Mountain Blues Summit has established itself as a top music festival and is ready to hit awesome and epic status in 2013.

Mike Combrinck started the Blues Summit on the 15th November 2006 at the Tafelberg Tavern in Cape Town. This debut of the festival saw the reunion of the Blues Broers for a special summit performance, and with the help of Boulevard Blues, Albert Frost, Dan Patlansky, Delta Blue, Piet Botha and Southern Gypsey Queen, it was a great success.

In 2007 Mike entered into negotiation with long time bastion of Blues Rock, Richard Pryor to co-partner him in managing the Blues Summit. Richard ‘a solid man of Rock’ had an axe to grind and was sharpening his blues pencil to take the summit up a notch.His mandate was a musically successful summit with financial independence.

Tapping into his own musical resources, database and Blues Wigi Boards, Richard secured the sponsorship of Combustion Technology to help out financially.

Paul Bothner Music  joined as a sponsor in 2009 and they have been a mainstay supporter and sponsor ever since. Fender threw some muscle into the event as well by offering a Genuine Fender axe giveaway at every summit.

Whats on the Blues Menu?

Ticket sales are open and are available at Computicket:

Camping Ticket    R160 (separate and limited to 200 tickets) Camping is only available for both nights.

Free entrance for children under 10 years.

Note: Only presales tickets qualify for the lucky draws. Winners of the main competitions must be there to claim their Prizes. 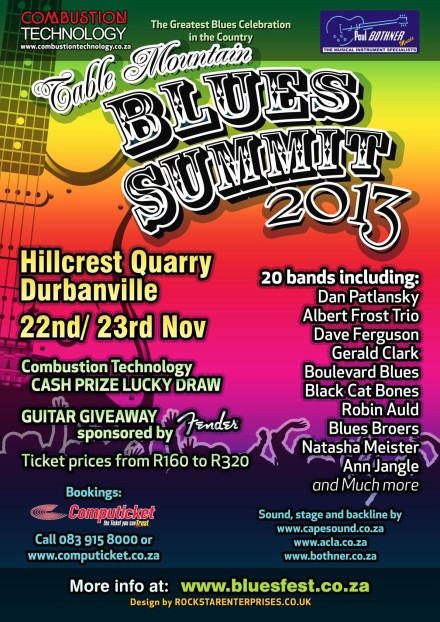